Warren Bernard contributes a Secret History of Comics bit to start off the new year right: 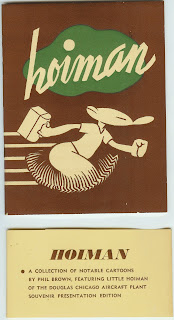 The first scan shows the cover of the book called "Hoiman", below it is the paper wrap around that was fortunately intact. This is because nowhere in the book itself is there any reference to where this stuff was published, which the wraparound says was for the Douglas Aircraft Plant in Chicago, IL. 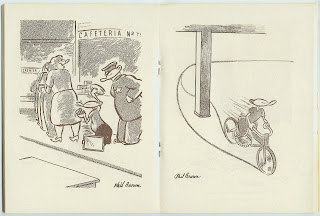 Douglas Aircraft at this time had its main plants out in California, some others in Oklahoma, there were 7 total Douglas plants in operation during World War II. Now the question is, were these cartoons just done for only the in house mag for the Chicago plant? Did the other plants also use "Hoiman"? If not, what cartoons did they use? And who is Phil Brown? What else did he do? Where there other "Hoiman" books? How long did "Hoiman" run? Was "Hoiman just for Douglas Aircraft, or did other manufacturers also use the cartoons?

The Secret History of Comics does not give its secrets up easily...
Posted by Mike Rhode at 8:23 PM