Posted by Mike Rhode at 9:37 PM No comments:

Posted by Mike Rhode at 9:20 PM No comments:

There's a shot of Jo Chen's cover in this interview:

Posted by Mike Rhode at 8:57 PM No comments:

The Comic Book Legal Defense Fund is proud to host Craig Thompson at this year's Small Press Expo, and to premiere his eagerly awaited graphic novel HABIBI! Through a special arrangement with Random House, a benefit preview edition of 100 signed & numbered copies of the graphic novel will be available to donors who contribute $100 or more to the CBLDF at SPX. These copies will be available on a first-come, first served basis when the show opens on Saturday, September 10.

In addition to this rare preview, the CBLDF is also auctioning off lunch at SPX with Craig and #1/100 from this preview edition on eBay starting on Tuesday, August 30th, and ending on Thursday, September 8th. Bid on this exciting auction now!

Craig Thompson says, "It's very exciting to be able to launch HABIBI at SPX in a way that gives back to the CBLDF. I got my start in small press comics, and have always been supportive of the CBLDF. Being able to help out in this way, and to appear at the show with HABIBI feels like a homecoming."

Sprawling across an epic landscape of deserts, harems, and modern industrial clutter, HABIBI tells the tale of Dodola and Zam, refugee child slaves bound to each other by chance, circumstance, and love. We follow them as their lives unfold together and apart; as they struggle to make a place for themselves in a world fueled by fear and greed.

At once contemporary and timeless, HABIBI gives us a love story of astounding resonance; a parable about our relationship to the natural world, the cultural divide between the first and third worlds, the common heritage of Christianity and Islam, and the magic of storytelling.

This is a rare opportunity to spend time with one of the great modern cartoonists, and receive an extremely limited edition of what is sure to be the biggest graphic novel event of 2011.

All proceeds from this auction will immediately benefit the First Amendment legal work of the CBLDF.

Posted by Mike Rhode at 9:15 AM No comments: 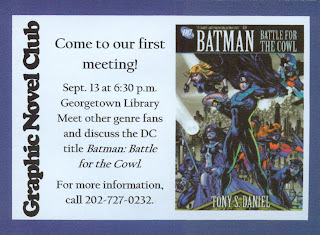 On September 13th, the Georgetown Library Graphic Novel Club meets at 6:30 pm for the first time, discussing Batman: Battle for the Cowl. For information call 202-727-0232.
Posted by Mike Rhode at 8:45 AM No comments:

SPX at LOC in TCJ

A prediction about Habibi

I talked to Craig Thompson today for a City Paper feature, and thus got to read the galleys of Habibi early.

My prediction - this graphic novel, and it really is more like a novel that you have to read in chunks - will be the hot book of 2011 in the wide world, the way Mazzuchelli's Asterios Polyp was in 2009.

It's not for kids though.

Richard (Cul de Sac) Thompson was interviewed for the latter; I'm not sure if he or Donna (Reply All) Lewis or Gene (Barney & Clyde) Weingarten or Kevin (Crock) Rechin are participating in the former.

Meet a Local Cartoonist: A Chat with Marty Baumann


Most non-animation fans probably don't know his work, but Marty's got a real sweet style.

WCP: What monument or museum do you take most out-of-town guests to?

MB: Gettysburg. The battlefield is one of the most awesome places on earth.

Posted by Mike Rhode at 6:55 PM No comments: