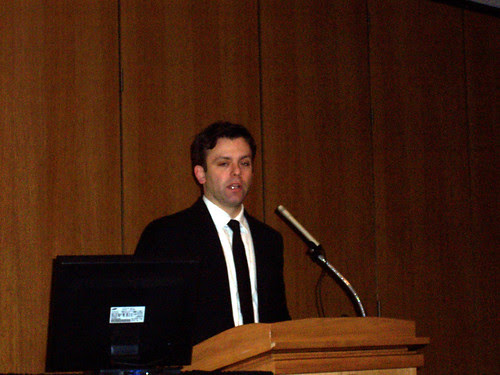 Anthony Lappe, author of the graphic novel, Shooting War, spoke at the Library of Congress today at lunchtime. Lappe, an editor at Guerrilla News Network had been to Iraq as an embedded reporter and produced a film about his trip there (which is available on their website). He will also be appearing at Bourbon tonight at 9 pm.

Lappe returned from Iraq disillusioned with both bloggers and mass media and wrote this satirical graphic novel (which started as a film). In 2011, blogger Jimmy Burns, accidentally films a suicide bombing for his blog, and then parleys that fame into a reporting trip to cover the Iraq War. His blogger character Burns arrives in Iraq with no journalistic experience, but is mentored by Dan Rather who's reinvigorating his career at the front. Lappe noted later that Rather had sent a nice note about his appearance in the book, and that none of the actual people or references in the book objected.

The artwork is done on a computer, probably a Wacom tablet. Lappe found his collaborator, artist Dan Goldman by placing an ad on Craig's List. Although Goldman wasn't at the event, Lappe showed some of the artwork, and the process of arriving at a finished page. Goldman seems to draw the figures, then layer in a real photograph as background.He did point out that all of the logos had to be replaced by Goldman for the UK edition due to their differing laws.

The project first appeared on Smith Magazine and can still be seen at http://www.shootingwar.com although that version is different than the final book.

For the hardcore superhero fans, Lappe pointed out that he was influenced by Spider-Man when writing this. His character gains great power like Peter Parker (by being the only person to videoblog a terrorist event) and then tries to live up to that power while still being a normal guy. Not a comic book reader, Lappe was surprised that no reviewer had picked up that link.

In the Q&A period, Lappe noted that the main character may return as a tv series with a concurrent series of comic books. He also said that he had no editorial interference from Grand Central Books (formerly Warner Books), his co-author is working on a graphic story about the current election, and while he admires the work of Joe Sacco, he really didn't want to repeat his movie as a comic book. He also railed against the comic industry a bit, noting that while up for an Eisner at San Diego, he found very few works that addressed the war. He was asked about veterans views on the book - the talk was sponsored by an LOC vet group - and said that his friends who were veterans liked the book, but that might be just because they were his friends. However, he did change one character, a Lt. Colonel, and his reaction to the death of one of his soldiers, based on responses to the online story. 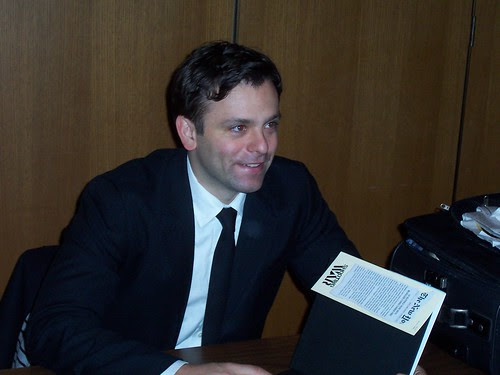 Obviously I bought a copy of the book and had it signed. I'm looking forward to reading it. More notes later as they occur to me. 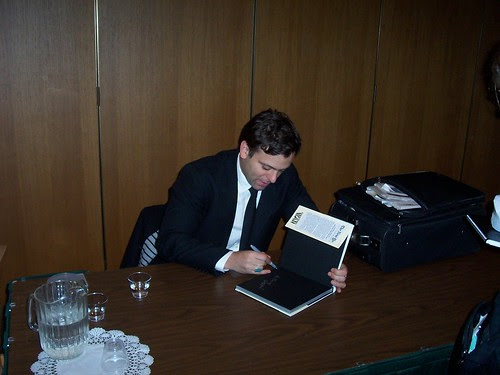