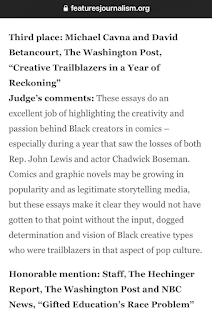 DIVERSITY IN DIGITAL FEATURES
The coverage of any A&E, features or lifestyle topic that highlights the diversity within a publication's audience.

Third place: Michael Cavna and David Betancourt, The Washington Post, "Creative Trailblazers in a Year of Reckoning"
Judge's comments: These essays do an excellent job of highlighting the creativity and passion behind Black creators in comics – especially during a year that saw the losses of both Rep. John Lewis and actor Chadwick Boseman. Comics and graphic novels may be growing in popularity and as legitimate storytelling media, but these essays make it clear they would not have gotten to that point without the input, dogged determination and vision of Black creative types who were trailblazers in that aspect of pop culture.

Posted by Mike Rhode at 7:10 PM No comments:

Roye Okupe interviewed at The Beat

Hans Vogel is Dead: Volume I on Kickstarter

Hans Vogel is Dead: Volume I

An anti-fascist fairytale about a World War II fighter pilot navigating the afterlife by Sierra Barnes.

Hans Vogel is Dead: Vol I is a 272 -page full colour original graphic novel from writer and artist Sierra Barnes, and the latest project from independent publisher Cast Iron Books. 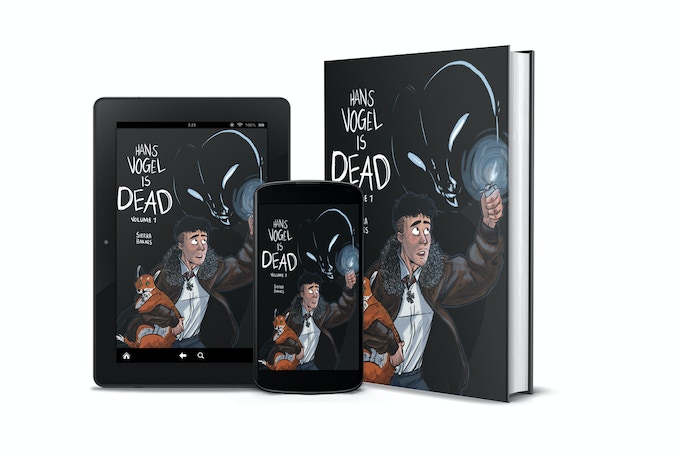 Hans Vogel is Dead: Volume I by Sierra Barnes

This campaign is to fund production and distribution costs, to get this story printed and out into the world and as many hands as possible.

The year is 1940, the Blitz is raging, and Hitler's forces are sweeping across Europe.


At the front of the invasion is the victorious Luftwaffe,  and at the front of the Luftwaffe is Hans Vogel: fighter pilot, ace, and  recipient of the prestigious Knight's Cross of the Iron Cross medal.  Young, painfully shy, and with the backbone of a jellyfish, Hans keeps  his head down and does what he's told – but something still feels… off.

One night on a routine raid, Hans experiences a freak radio  malfunction, is separated from his unit, and is shot down and killed.


That's where his problems start.


Hans finds himself carried out of his world by the Valkyrie Brynhildr, but instead of Valhalla, he's brought to the mysterious  Märchenwald, the world of the fairy-tales. Märchenwald has been transformed by the war Hans left behind and taken over by the malevolent  and cruel Erlking, a monster who traps people within a sinister web of  Stories. Stripped of everything he was and forced to confront the consequences of the evil he served, Hans finds himself faced with a choice: give in to the same evil a second time, or try and make things right. 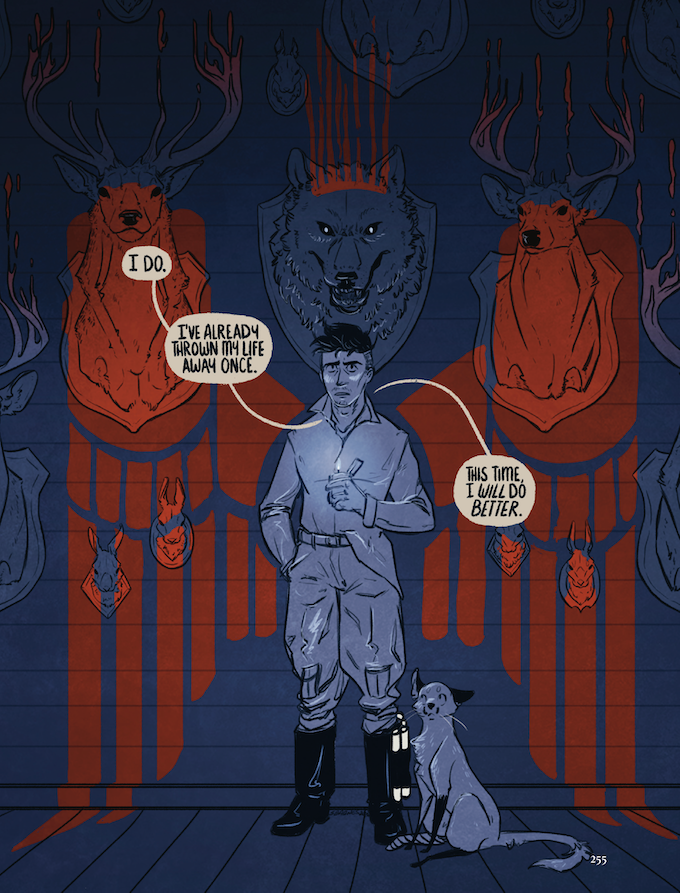 Hans Vogel is Dead is an anti-fascist fairy tale with elements of historical fantasy about the power of narratives, the question of individual responsibility in a totalitarian regime, and the struggle to become a better person.

Posted by Mike Rhode at 3:53 PM No comments:

Teaching made me realize adulthood is a myth. I want to show my students it's okay to be human.

We're all just humans, figuring it out one day at a time Posted by Mike Rhode at 4:02 PM No comments:

Today: Tickets on sale for Jeff Kinney (Oct 26) via Hooray for Books

In Big Shot (Diary of a Wimpy Kid #16) Greg Heffley and sports just don't mix. After a disastrous field day competition at school, Greg decides that when it comes to his athletic career, he's officially retired. But after his mom urges him to give sports one more chance, he reluctantly agrees to sign up for basketball. Tryouts are a mess, and Greg is sure he won't make the cut. But he unexpectedly lands a spot on the worst team. As Greg and his new teammates start the season, their chances of winning even a single game look slim. But in sports, anything can happen. When everything is on the line and the ball is in Greg's hands, will he rise to the occasion? Or will he blow his big shot?
Posted by Mike Rhode at 12:31 PM No comments:

Join moderator Alex Hoffman and fellow critics Rob Clough, Daniel Elkin, and Jules Bakes for a special SPX edition of the podcast Enemy Of The State. The panel's special guest is artist E.A. Bethea, whose Francis Bacon was nominated for a 2021 Ignatz Award. They will ask her in-depth questions regarding the comic and its remarkably dense qualities.

Tom Hart
Sep 18, 2021
SmallPressExpo
https://www.youtube.com/watch?v=vK78ll2djwM
You can make comics only with an open heart and whatever materials you have lying around. In one of the favorite workshops at SAW, Tom Hart will guide you through making 8-page mini-comics that uses song lyrics, personal memories and simple drawing and painting to make a personal comic that says what you feel and has a magic all its own. Suitable for all ages.

Join moderator Carta Monir and guests Emma Jayne, Crystal Frasier, Walter Scott, and in a celebration of queer joy in comics. This discussion focuses on the power of queer friendships and happiness as both driving force and radiant rebellion.

Award-winning documentarian Marjee Chmiel screens her documentary on SPX. Titled Ourselves, In Stories, it takes a look at the challenges, obstacles, and rewards of crafting new stories and redefining our cultural vision for whose stories are heard. Moderator Warren Bernard joins Marjee after the screen to ask her about the inspiration for and making of the film.

SPX 2021: The Local Scene: Shows, Publishing, and Getting Started

Rob Clough,Hartley Lin, Keiler Roberts, and Jason Shiga.
Sep 19, 2021
SmallPressExpo
https://www.youtube.com/watch?v=aL1ngQaoDJQ
What mindset is required for cartoonists to work? Is drawing a form of work or play? How does this relate to Lynda Barry's conception of play as a serious, meditative activity? How do artists escape thinking about whether or not their work is good while they are doing it? Moderator Rob Clough discusses these and other questions with Hartley Lin, Keiler Roberts, and Jason Shiga.

Liz Reed of Cuddles and Rage
Sep 19, 2021
SmallPressExpo
https://www.youtube.com/watch?v=HKkmBSoX_VI
Liz Reed of Cuddles and Rage walks you through how to sculpt Zombie Strawberries from C&R's graphic novel Bites of Terror. This online workshop is designed to use clay and household materials to create your very own mixed media comic at home. The materials needed include: white, green, and red clay (polymer or air dry), foil, toothpicks, q-tips, a paintbrush, a gray marker or paint, cotton balls, glue, and a cutting tool. We'd love to see your zombie strawberries in action! When posting to social tag @spxcomics and @cuddlesandrage. Bites of Terror is a mixed media horror anthology by Cuddles and Rage from Quirk Books. You can find Bites of Terror online wherever books are sold or buy the book directly from Cuddles and Rage on Etsy (https://www.etsy.com/shop/CuddlesAndRage).

Carl Antonowicz
Sep 19, 2021
SmallPressExpo
https://www.youtube.com/watch?v=BKYRx3VvOWw
Büer's Kiss is a genre-bending live comics performance combining projected images, voice actors, and foley effects for an unforgettable adaptation of cartoonist Carl Antonowicz's graphic novel of the same name. This recording was made during the show's debut in 2018 at Pittsburgh's New Hazlett Theater. Find more from Carl at www.cantocomics.com!