A reading list of comics by a former colleague of mine

We worked together at the archives of a medical museum; who knew she'd go on to write about comics too?

By Emilia Packard on November 27, 2017
This article was published in Library Journal's December 1, 2017
http://reviews.libraryjournal.com/2017/11/collection-development/a-course-in-comics-collection-development-graphic-novels-nonfiction/
Posted by Mike Rhode at 7:47 PM No comments:

Yesterday, we reprinted a piece about Gasoline Alley cartoonist Jim Scancarelli being selected for Arlington's Wakefield High School's Hall of Fame. Today we present some of the cartoons he did for the school newspaper, again courtesy of the Alumni group which also sponsors scholarships.

Wimberly is from the DC area... I backed this earlier today.

Posted by Mike Rhode at 2:20 PM No comments:

Enjoy a free Japanese film at the JICC! Snoopy — the world's coolest dog — finally gets the book he deserves

A note to Eric Trump: Many found Disney's 'Pocahontas' offensive, but not for its title

This interview was done at Busboys & Poets at Takoma Park. I was Linier's ride so I had a drink while they talked. If you haven't read his comics, do so now.
The Argentine Cartoonist Who Moonlights As A Nerd Rockstar
Camilo Garzón
NPR's Alt.Latino blog November 30, 2017
https://www.npr.org/sections/altlatino/2017/11/30/566384555/the-argentine-cartoonist-who-moonlights-as-a-nerd-rockstar
Posted by Mike Rhode at 11:05 AM No comments:

Kimble, J. J. 2017.
Framing the president: Franklin D. Roosevelt, participatory quests, and the rhetoric of possibility in World War II propaganda.
Speaker & Gavel, 54 (1): 94-112.
Online at https://cornerstone.lib.mnsu.edu/cgi/viewcontent.cgi?referer=https://www.google.fr/&httpsredir=1&article=1142&context=speaker-gavel
This essay examines The Life of Franklin D. Roosevelt, a comic book distributed internationally by the Office of War Information (OWI) in late 1942, as a creative form of international propaganda. Drawing from existing research in comic scholarship, narrative theory, and visual inquiry, this case study suggests that OWI's booklet represented a fusion of verbal and visual appeals, which together worked to produce a potent depiction of President Franklin D.Roosevelt's character traits and exceptionality. The analysis concludes that this depiction ultimately presented the president as the protagonist of a romantic quest narrative, one that actively invited foreign readers to envision an Allied victory in the ongoing war.
Thanks to Leonardo de Sa for the tip, and he'd be glad to hear from anyone with more information on this comic.

Posted by Mike Rhode at 4:15 PM No comments:

Reprinted with permission from Warrior News, Fall 2017. For information on alumni from Wakefield High School (Arlington,VA) and the scholarship program, click here.

2017 Inductees into the Hall of Fame 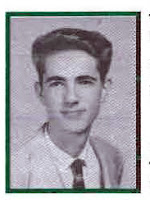 Jim is a cartoonist who writes and draws the syndicated comic strip "Gasoline Alley". He is also a well-known and prize-winning bluegrass fiddler.

Jim's cartoon career started at Wakefield. The student newspaper and literary magazine of his era are filled with his drawings. The student newspaper featured a cartoon "Gus Todian", about a Wakefield custodian. Fifty years later, Jim revived Gus, the custodian at Wakefield, in "Gasoline Alley". During his time at Wakefield, Jim says "Comics were my escape ... The characters became my friends." He says he wasn't a good student and it was the work of several teachers who channeled his desire to draw and taught him the skills he needed to be successful.

Jim has been a freelance magazine illustrator, wrote and acted in radio programs, and was even the Art Director for "The Johnny Cash Show" in the early 1960s. Jim began his work on Gasoline Alley in 1986, and has collaborated on the Mutt and Jeff comic strip, as well.

His comic strip often has social and community meanings. Through his comic strip, he brought attention to the construction of the World War II Memorial and the National Museum of the United States Army. In 1988, he received the National Cartoonists Society's Story Comic Strip Award. As a bluegrass fiddler, he founded the Kilocycle Kowboys and was a prizewinner at the Old Fiddlers Convention. The American Folklife Center at the Library of Congress has his fiddle recordings. He jokingly says "I've been playing the fiddle too long to be bad at it."

Posted by Mike Rhode at 3:48 PM No comments:

Heroic Aleworks to close on Dec. 15

In a Facebook post today, Heroic Aleworks, a superhero-themed brewery in Woodbridge, Virginia, that opened in January, announced that it will close on December 15, citing that "the  numbers just weren't in our favor."

From the post: "We are deeply saddened to announce that Heroic Aleworks will be closing on December 15. Thank you all so much for your support over the past year and for sharing this experience with us. But we still have a few weeks left, and you know we're gonna go out in style, so stay tuned for the announcements. We hope you'll be able to join us before it's all done to make some more great memories!"

Dec 8: Animezing!: Ghost in the Shell

Join us for a FREE classic anime film at the JICC!

Posted by Mike Rhode at 2:39 PM No comments: