I hit a local antique show this weekend and picked up some prints of Opper, Nast and the Puck gang including Keppler. They're big - too big to scan easily - but these postcards I also picked up weren't. 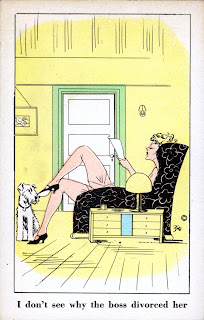 I don't know anything about Zito. At first judging from the above cartoon, I thought he was a girly cartoonist. 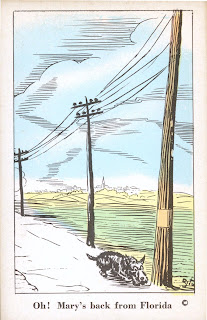 Then as I found a couple more, it became obvious that he was a dog cartoonist. The third seems to be a World War II cartoon, but it's hard to tell. The top two are credited to the Novel Art Picture Co of New York while the "Victim" doesn't say anything. 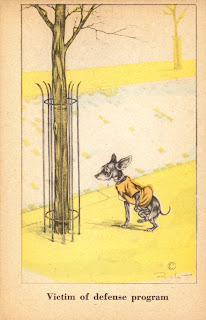 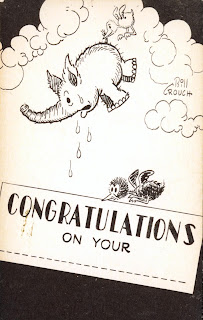 This one is signed by Bill Crouch - anyone know if it's the comics historian? This is from the Mayrose Co. Publishers, Linden, NJ. 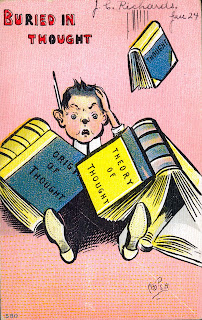 Finally, I think this is an early Percy Crosby. The postmark is Nova, OH, January 20 1912 and Pa asks his children to try to buy some clover seed when they're downtown and notes Mrs. Amos Woolfe died suddenly of a stroke of paralysis. Percy Crosby did the excellent "Skippy" comic strip for many years and it's overdue for a reprint.
Posted by Mike Rhode at 5:59 PM

Those are so cool, especially the early Percy Crosby. Though I'm sorry to hear about Mrs. Amos Woolfe.

A girlie cartoonist by the name of Zito, eh? Sounds familiar.

Seriously I have heard of this guy. An old boss of mine went to a b&b in NH with his wife. The Piano Room there had a few of his prints around the room. I can't be positive, this was a while ago and it was only told to me in passing, but I think they were inked dog portraits.