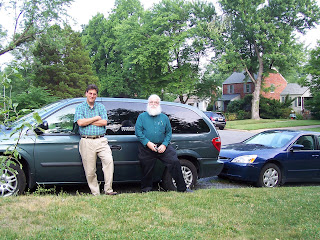 Michigan State U's Comic Art Collection librarian Randy Scott, the man who built their collection from 6,000 comics to 200,000 with another 40K of related material, stopped in this Sunday. I was handing off 2 boxes of clippings and ephemera, 22 boxes of manga, and 3 boxes of miscellaneous comics publications. Randy had already stopped in State College, Pennsylvania and loaded up with 3 boxes of half-price obscure graphic novels and collections. I'd never heard of a bunch of it. Whilst here, we ran out to Big Planet Vienna and bought another 2 boxes of European, non-English language comics. On Monday, he had a brief meeting with Library of Congress staff about the future of comics collecting before riding off into the heat. In about six months, all of this material should be catalogued and available for use.

Anyone who reads this blog should consider donating comic stuff to him. I must say I had a hard time passing on the self-published 1984 book of computer-drawn cartoons* but I did.

Randy's on the right above, btw. As is the link to the Library.

And what a nicely maintained yard that is, from what little I can see.

I bought another 38 Raijin Comics and 3 other manga books for him today.

And I mowed the lawn the day before, just in case we needed a staged backdrop.