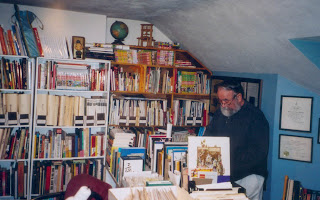 John Lent in his room devoted to world cartooning especially that of Asia.

This is the complete text of a book review that I have in the current issue, 9:1, Spring 2007.

I can’t write a disinterested review of John’s bibliographic achievement – in my small way, I’ve attempted to create a bibliography on comics as well, and have cooperated with John on both his and my projects, as well as in the pages of this Journal, and he’s mentioned me in the introductions to these volumes. If I had paid more attention at the Georgetown Manga Conference (now claimed as the first International Comic Arts Forum nee Festival) when John announced his project, my co-author John Bullough and I would never have started our online Comics Research Bibliography. In the 1990s, John published four volumes of citations. From 2004-2006, he added six more volumes, bringing the 10-volume total to 85,106 citations, arranged in by continent, country, media and subject order. This work is even more astonishing when you consider that he began it before computers were widely available, especially in libraries, and to this day he neither types nor uses a computer directly himself.

Lent’s work may be comparable to that of John Shaw Billings and the creation of the Index Catalogue of the Surgeon General’s Library in the nineteenth century. Like Billings did with medicine, Lent has attempted to capture every citation relevant to his subject. Billings’ work set the standard for what became the National Library of Medicine and its collections; perhaps an ambitious librarian may attempt the task of getting all the articles cited by John gathered in one place. It would be a marvel of a research library. John has also included ephemera in these pages – the fugitive material like conference papers and Convention booklets and exhibit brochures that may be helpful, but can be very hard to find, let alone know they exist.

John’s bibliographies may eventually be eclipsed by online bibliographies – he predicts as much in the introductions to the last volumes -- but there was no internet when he started. John’s tireless work in the field has led to amazing statistics like these:

These numbers may be equaled eventually, but the groundbreaking nature of John’s achievement obviously cannot. In addition to the numbers, John provided intellectual organization to the subject. His project is carefully broken down into discrete projects to manage the data. For example, in the 2006 Comic Books and Comic Strips through 2005 volume, one can drill down to a subject like “Sidekicks” this way – Comic Books – Content, Form – Genres and Types – Sidekicks to find “Shining a Spotlight on Sidekicks” from the Comics Buyer’s Guide in 2000.

As with any project of this size, errors creep in and John would have benefited from another pair of eyes reading the manuscript. A small section in Comic Books and Comic Strips in the United States through 2005, under Comic Books - Media, Popular Culture Connections – Radio (p. 267) has seven entries in it. Two of these have nothing to do with radio. An article on Archie Comics' 1960s imprint Radio Comics is misfiled here, as is an article on DC's Sandman Mystery Theatre comic book. Surprisingly enough, the other five entries are actually on radio which has not had a major cross-influence with comic books for four decades. The citation on Radio: An Illustrated Guide could also, and perhaps more appropriately, have been filed under 'Jessica Abel' since she did the comic book. These three entries also point to Lent’s relative lack of knowledge about American comic books as opposed to comic art in the rest of the world. I do not believe that he has indexed Wizard, the American superhero-loving magazine at all either.

A pair of extra eyes such as myself, or Gene Kannenberg, Jr. (Comics Scholarship Annotated Bibliographies at ComicsResearch.org) or Randy Scott (The Reading Room Index : an Index to the Holdings of the Michigan State University Libraries Comic Art Collection) would have caught Green Lantern’s alter-ego Hal Jordan being cited as a cartoonist, or misspelling Alison Bechdel’s name as Becktel and putting her under Comic Book Creators, which until the publication of 2006's Fun Home, she was not, having instead done the Dykes to Watch Out For comic strip for over a decade. I could probably continue to find mistakes like this, but what’s the point? The real point is that John was doing these bibliographies when no one else was, with the possible exception of the late Jerry Bails' Who’s Who of American Comic Books database which dates back to the 1960s as well. John still maintains a wider scope than any other similar project, including those of institutions devoted to comic art. As Gene Kannenberg, Jr. recently wrote to me, “these books point out to us stupid monolingual Americans that there's a whole world out there - and, hell, look at all the comics they have, and all that's been written about them! Granted, that might have been more of a boon to his first editions than to the newest bunch (given how the growth of the Internet has shrunk the globe a bit), but it's still a monumental specific achievement: a concrete manifestation of John's evangelical zeal in learning about the whole world and sharing that world with his country's scholars.”

As John turned seventy this past year he has maintained a busy schedule that would break a lesser man, including teaching at Temple University and two Chinese universities, editing Asian Cinema and this Journal. As a result, some lack of proper indexing and cross-referencing resulted. Any comics scholar who buys his own copy of a relevant volume (and those of us serious about studying the art form should) might be advised to take a pencil and annotate the volumes with cross-referencing linking, for example, cartoonist Harvey Pekar to his publications American Splendor and Our Cancer Year. However, I firmly believe that no single individual (and not Google or its like either) will ever compile as wide-ranging and comprehensive set of bibliographies, in spite of easier access due to the internet. Perhaps we’ll see a large project, run as a cooperative like the Grand Comic Book Database – Pete Coogan at least has proposed one for indexing of articles on comics – but if so, we’ll be standing on the shoulders of John Lent.