While attempting to find something else entirely, I ran across this piece of original comic art - so I bought it. 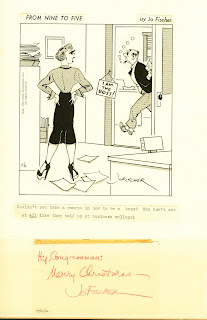 The strips is From Nine to Five by Jo Fischer from December 4, 1950. According to Allan Holtz's Stripper's Guide it ran from June 17, 1946 until sometime in 1971. For our younger readers, as the bookstore's note on the back helpfully read, "The applied toning film is usually called Zipatone." Also the gag might not be obvious anymore. Once upon a time, before sexual harassment training, there was a whole genre of gag cartoons about bosses seducing (or preying on, depending on your viewpoint) one's (definitely female) secretary. One can see the New Yorker's Cartoon Bank for more examples, I'm sure. (Oh, yeah, that works.) So, getting back to this cartoon, the secretary is turning tables by implying that she'd like to be hit on by the boss. Ahhh, the good old days.
Posted by Mike Rhode at 7:33 PM