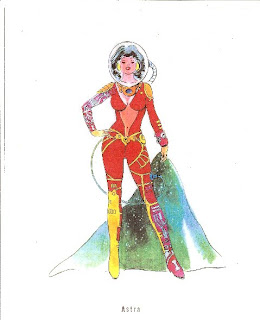 Karen Berman, Director, Super Heroine Manga Musical Astra from the Washington Women in Theatre has written in to say:

"Jerry Robinson (responsible for the iconic Joker in the Batman series) has joined forces with Washington Women in Theatre to produce an original musical about a superheroine named Astra. She’s a fearless, no-fuss woman who visits Earth for the first time, attempting to save her all-female planet from extinction. Her mission? To capture sperm. While discovering men for the first time on Earth, Astra also observes a confused world in the midst of a Cold War." 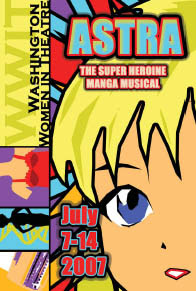 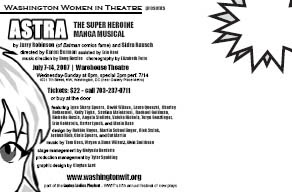 "This tongue-and-cheek parody about America from an outsider’s perspective was created back in the ‘80s, and has since become a popular Japanese manga by artists Shojin Tanaka and Ken-ichi Oishi. It all started one summer when Washington Women in Theatre co-founder Sidra Rausch approached Robinson in Cape Cod, where the two were both vacationing. A longtime fan, Rausch fearlessly approached him and asked, “how do you feel about feminism?” He was immediately on board. The two brainstormed Astra on the sand that summer, and worked for many years on the concept. The Super Heroine Manga Musical now includes original artwork, thirty never-before-heard songs and Robinson’s legendary spirit." 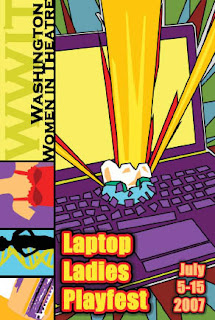 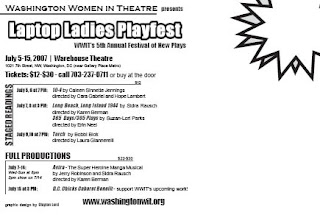 "The show’s national debut will take place at the Warehouse Theatre between July 7-14. Astra is part of the Washington Women in Theatre’s fifth annual festival of new plays. This year’s theme is "Laptops Ladies Playfest.” WWIT encourages original works written, directed and/or highlighting women such as Astra."

If I recall correctly, at least 1 issue of the comic was published in English as well. Jerry Robinson's still active in promoting comics - I think he's updating his history of the comics book, and he recently helped fill-in with a version of his superheroes exhibit when Art Spiegelman pulled out of Masters of American Comics at the Jewish Museum in NYC and left a hole. Plus he's a darn nice guy who's always been friendly whenever I've run into him.
Posted by Mike Rhode at 3:46 PM