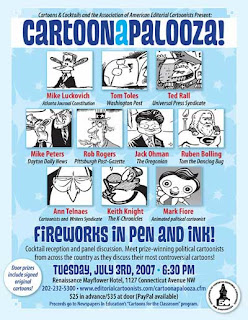 Dave Astor has the story at "Toles, Telnaes, Luckovich, Others to Speak At Pre-AAEC Confab Event," E and P Online (June 18, 2007).

You can buy tickets here and I don't think the AAEC will mind if I reproduce their blurb:

Cartoonapalooza: Fireworks in Pen and Ink!

Why did Tom Toles of The Washington Post get dressed down by the Joint Chiefs of Staff? How did Ted Rall invoke the wrath of a legion of 9/11 widows? Why did a Mercedes-Benz dealership in Atlanta take out a half-page ad to apologize for a Mike Luckovich cartoon? Meet ten of the nation's best political cartoonists as they discuss their most controversial cartoons. Cartoonapalooza, the kick-off event for the 50th anniversary convention of the Association of American Editorial Cartoonists (AAEC), is a rare opportunity for the public to meet prize-winning political cartoonists from across the country as they discuss their most controversial cartoons. Join Tom Toles, Ted Rall, Mike Peters, Mike Luckovich, Rob Rogers and five other brilliant, ground-breaking editorial artists as they talk politics, the election, Bush and beyond. The public is invited to a cocktail reception before the panel discussion to meet the artists. Door prizes at the reception will include signed original cartoons and books. The proceeds from this event will go to support Newspapers In Education's "Cartoons for the Classroom" program, a non-profit program that provides editorial cartoon-related lesson plans for teachers. Cartoonapalooza is the must-attend event of the year for all political buffs and cartoon aficionados!
Featured Cartoonists:

This should be a lot of fun. I've heard 2/3 of the speakers and they've all been interesting. Keith Knight and Ted Rall are particularly... what's that word... articulate? Nah, I think it was opinionated. But I would imagine all the speakers are since you probably can't be an editorial cartoonist otherwise.

The whole conference schedule and registration info can be found here.
Posted by Mike Rhode at 6:34 PM

Indeed. So who's going?