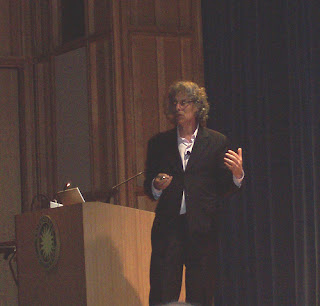 Bob Mankoff gave a very interesting talk today at the Smithsonian American Art Museum as part of their Steinberg exhibit. The talk was held in the lovely new auditorium apparently buried under the former courtyard. Mr. Mankoff talked about Steinberg's early cartoons for the New Yorker (which can be seen on the Complete New Yorker Cartoons cd), Steinberg's influence on his early work, and the nature of gag cartoons and humor. Mankoff said that the Caption Contest gets about 10,000 entries per week and showed a slide of how he and his assistants break up the entries to make sense of them. He had a lot of interesting points to make, and the working cartoonists I was sitting with, AAEC head Rob Rogers, Matt Wuerker, Nick Galifianakis and Richard Thompson all seemed engaged. I certainly was, but I'm not a professional cartoonist. 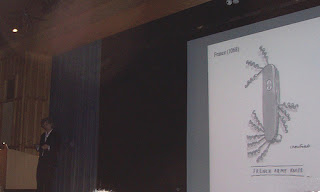 Crawford cartoon to illustrate the nature of humor. 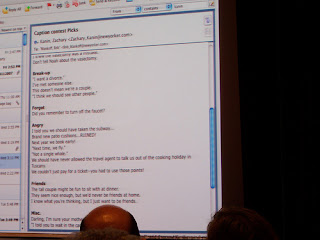 Some of the 10,000 entries to the New Yorker Cartoon Contest sorted into categories. 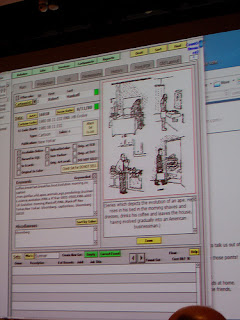 Afterwards Mr. Mankoff signed books including the New Yorker Book of Art Cartoons. In the accompanying pictures (below), Warren Bernard gets confirmation that four books is the complete set of Mankoff books, and gets them all signed at one fell swoop. Mankoff said that he didn't even have copies of them all anymore. 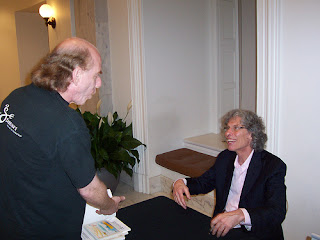 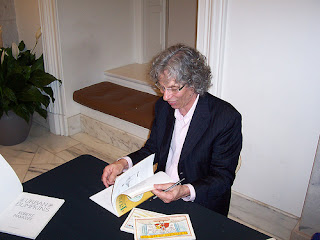 The rain started in earnest so Rob Rogers invited Mr. Mankoff to the museum's cafe with us and we had a fun hour hearing stories of the New Yorker, and talking shop. Matt stood us all to drinks, and Rob picked up the chips - thanks guys! One point Mankoff did make was that by animating cartoons, the Cartoon Bank could pick up new sponsors like Lexus - here's an example that Richard found. 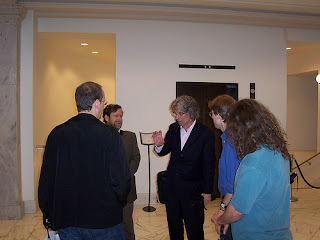 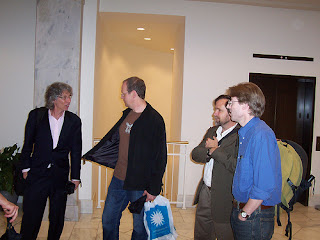 Rob Rogers forcibly suggests that Bob Mankoff might not want to go out in that rain.

The last two photos are everyone in the cafe. Richard's in the blue denim shirt, Nick's in blue shirt with long hair, Matt's in the brown jacket, Rob's in the dark blue jacket and Bob Mankoff's in the suit. This was a thoroughly enjoyable Sunday. Matt wrote down the best epigraphs from the talk, and hopefully one of the others will flesh out this entry a bit. 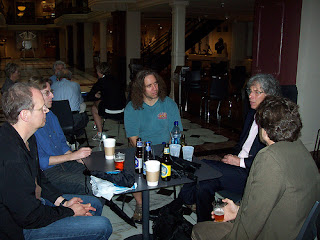 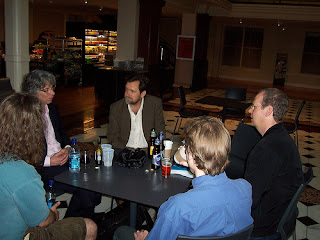 I saved the bottle of wine that Bob Mankoff didn't finish. It'll be up on eBay directly. Happy bidding!

good. thanks a bunch, richard. now you're really freaking out Mr Mankoff and he'll never print any of our cartoons....( like that was going to happen)

Mike summed up the afternoon so well I don't know what to add. I scribbled down a few choice thoughts from the talk that I'll dig back up to share sometime soon.

the best part in a general sense was the way he approached cartooning with such a great sense of play and deadly seriousness at the same time. maybe you have to be from New York to straddle these opposites but he does it so well. he brings a very sharp analytical focus to cartooning and at the same time a very loose, we're just fooling around here, street corner playfulness to it. much like the grand master Steinberg. seemingly childlike drawings done with the eye of a trained architect....and they're really, really funny.

Playful seriousness-- well put, Matt. Mankoff would make an excellent professor of humorous cartooning, and I'm sure such a thing exists. I'd take classes from him. As long as he grades on a curve.

Matt, please find that quote about humor being a counterweight to the hegemony of something. It'd make a great tattoo.