Review: Sense of Humor exhibit at National Gallery of Art

The National Gallery of Art describes its first exhibit of cartoon art thusly:
Humor may be fundamental to human experience, but its expression in painting and sculpture has been limited. Instead, prints, as the most widely distributed medium, and drawings, as the most private, have been the natural vehicles for comic content. Drawn from the National Gallery of Art's collection, Sense of Humor celebrates this incredibly rich though easily overlooked tradition through works including Renaissance caricatures, biting English satires, and20th-century comics. The exhibition includes major works by Pieter Brueghel the Elder, Jacques Callot, William Hogarth, James Gillray, Francisco de Goya, and Honoré Daumier, as well as later examples by Alexander Calder, Red Grooms, Saul Steinberg, Art Spiegelman, and the Guerrilla Girls.
Any exhibit on humor that covers 500 years (from 1470 through 1997), two continents and at least five countries is going to have to deal with the vagaries of what humor actually is. Even within my lifetime, what is considered permissible humor in America has changed, sometimes drastically. The exhibit was divided into three galleries – according to their press release (available at the website) the first "focuses on the emergence of humorous images in prints and drawings from the 15th to 17th centuries. Satires and caricatures gained popularity during this era, poking fun at the human condition using archetypal figures from mythology and folklore. While not yet intended as caricatures of individuals, Italian works reflected the Renaissance interest in the human figure and emotion." To modern eyes, drawings of dwarves or grotesques do not really appear to be either humorous or a cartoon, but the curators make the arguments that the foundations of caricature and satirical cartooning are laid in this period.
The second gallery begins featuring artists that most of us would consider cartoonists as it "continues with works from the 18th and 19th centuries, when certain artists dedicated themselves exclusively to comical subjects." In this room one found a good selection of the British masters Hogarth, Rowlandson, Gillray and Cruikshank, as well as Goya and Daumier (and oddly enough the painter Fragonard who drew an errant lover hiding from parents in an etching, The Armoire). This is the most interesting part of the exhibit for historians of comics, and the strong selection of etchings and drawings is worth studying since one rarely gets to see the contemporary prints, or even the original drawings such as Cruickshank's pencil and ink drawing Taking the Air in Hyde Park (1865). The release also notes, "Included in the exhibition is Daumier's Le Ventre Législatif (The Legislative Belly) (1834), a famous image that mocks the conservative members of France's Chamber of Deputies," but the exhibit does not note that the sculptures Daumier also made of the Deputies is on permanent display in another gallery of the museum -- a lost opportunity.
The final gallery "focuses on the 20th century and encompasses both the gentle fun of works by George Bellows, Alexander Calder, and Mabel Dwight and the biting satire of Hans Haacke and Rupert García. Works by professional cartoonists such as R. Crumb, George Herriman, Winsor McCay, and Art Spiegelman are presented alongside mainstream artists like Calder, Roy Lichtenstein, Jim Nutt, and Andy Warhol." Of most interest were the McCay (Little Nemo in Slumberland: Climbing the Great North Pole) and Herriman (Ah-h, She Sails Like an Angel, 1921) originals, both of which are worth examining in detail. This section also showed the paucity of the NGA's collections in modern comic art. These are joined by a print by Art Spiegelman, and several Zap Comic books, recently collected and described in standard art historical terms: 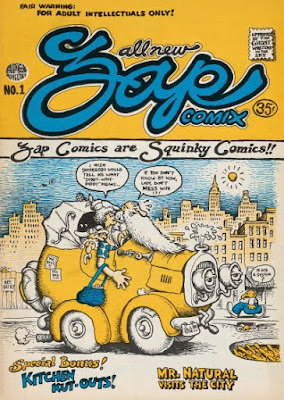 The fact that the Gallery still can not bring itself to use the word 'comic book,' the standard term as opposed to paperback bound volume, unfortunately shows that it has far to go in dealing with the twentieth century's popular culture rather than fine art. Still, the exhibit is interesting, and well-worth repeated viewings which are almost necessary to understand the material from the first four centuries of the show.

(This review was written for the International Journal of Comic Art 20:2, but this version appears on both the IJOCA and ComicsDC websites on November 16, 2018, while the exhibit is still open for viewing. For those not in DC, Bruce Guthrie has photographs of the entire exhibit at http://www.bguthriephotos.com/graphlib.nsf/keys/2018_07_29B2_NGA_Humor)
Posted by Mike Rhode at 10:55 AM