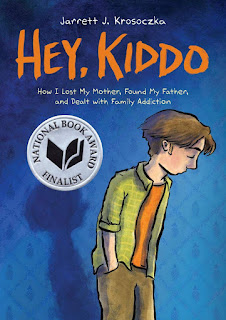 Jarrett Krosoczka is probably best known as the cartoonist for the Lunch Lady graphic novels for children. I hadn't run across his work before, but I was pleased to make his acquaintance with this book.

Hey, Kiddo: How I Lost My Mother, Found My Father and Dealth with Family Addiction (Scholastic Graphix, 2018; $25/$15) is definitely aimed at an older audience than his other books. The marketing material suggests a young adult audience, but I think it can enjoyably be read by adults as well. Krosoczka tells the story of his childhood and teen years, in a muted palette of browns and oranges. He was raised by his grandparents when his young mother mysteriously kept disappearing from his life. His father was never mentioned or featured in his life. Krosoczka tells his story chronologically, which keeps some suspense for anyone who hasn't read the promotional material or interviews.

He begins with his grandparents meeting and marrying and raising a family of five children after his grandfather Joe Krosoczka returned from World War II and convinced Shirley Olson to marry him. Joe began his own business making a particular piece for plumbing and seems to have been a success, but Shirley had difficult times with her children, especially Jarrett's mother, her daughter Leslie. 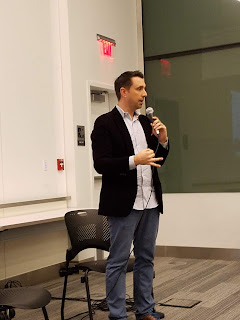 Krosoczka recounts staying with his mother in a house that his grandfather provided for them, but she continues to shoplift and run around with less-than-admirable men, including two who come in one night covered in blood. His mother disappears after that and the preschooler moves in with his grandparents that raise him.

For the next few years (and chapters), Leslie pops in and out of his life, and as a young boy, after a trip to Disneyworld, his grandparents reveal that his mother is a drug addict and in jail. She's been addicted to heroin since she was a teenager. Eventually the teenage Jarrett uses his talent for cartooning to escape from working in the family factory, and reconnects with his long-missing father.

Throughout the book, his grandparents are presented as real people with some serious flaws revealed especially about his grandmother. However the author is adamant that they did give him a good life, and he has no regrets about the way things turned out.

Due to Krosoczka's cartooning ability, the story works as a graphic memoir. As a prose piece, it would be about 10 pages long. It held my attention, and I definitely felt for the young boy, so I would recommend this to people interested in memoirs. It was a National Book Finalist this year, and is available online and in most bookstores.

Krosoczka spoke about the book at DC's lovely West End Library on November 8, 2018 and took questions from his friend, children's book authority Mindy Thomas. Here are some pictures from the event. 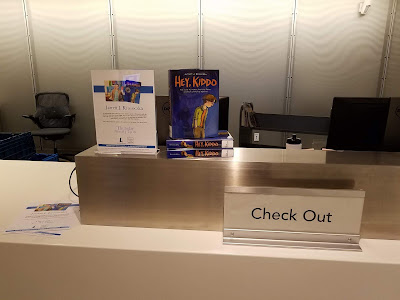 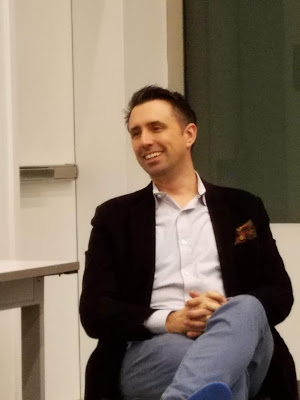 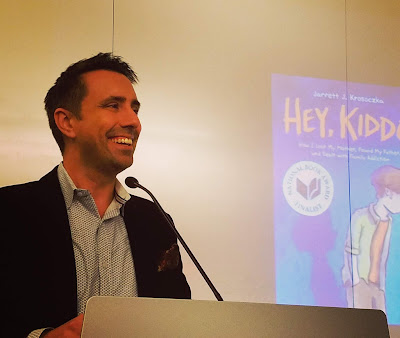 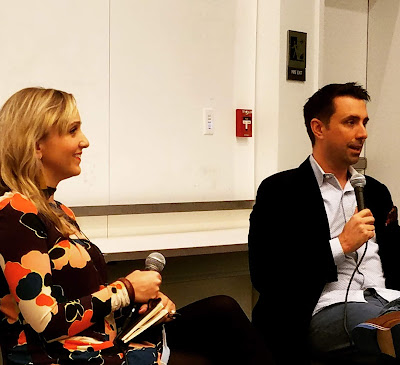