Review: Black and White / Thoughts in Cartoon by Mohammad Sabaaneh 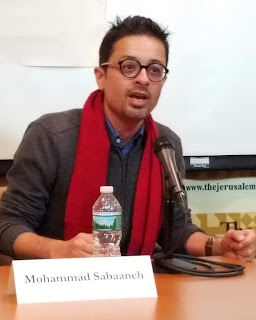 Mohammad Sabaaneh is a self-taught Palestinian cartoonist, who, like all good editorial cartoonists, often finds himself in trouble with both the Israeli and the Palestinian governments. Notwithstanding the need to teach art, and the regular seizure of his artwork when he returns from travelling (and thus he says he only carries reproductions personally), Sabaaneh has been able to compile a book, White and Black: Political Cartoons from Palestine (JustWorldBooks, 2017; $20). While touring the East Coast for this publication, he stopped in Washington to introduce a small exhibit of his linocut art.

Linocut is a negative printing process made by using sharp tools to engrave a piece of linoleum, and then inking it, and pressing it into paper. Sabaaneh was taught the technique by World War 3 Illustrated’s Seth Tobocman in New York. He took the gravers back with him to Palestine, found linoleum from a hospital’s floors, and found a substitute for the ink that was unavailable at home, and began making art. In his artist's statement, he wrote, “When I do linocut, I feel like I am giving a gift to myself! It is so exciting when you carve the linoleum, then cover it with the ink, then press it… and just waiting to find the result. No-one around you understands what exactly you are doing. I feel that I am creating a version of myself as well as creating art. The amount of wet black ink on the paper reflects me, and reflects the world around us. My daily political cartoon is influenced by the linocut technique and I like the results. Linocut is also one of the most important techniques for producing political posters.”

The exhibit consists of fewer than twenty pieces hung around hallways in a small office area, some of which seemed thematically out of place such as “Malcolm” which is a portrait of the 1960s black American activist Malcolm X. Others are what one expects from a cartoonist who refuses to collaborate with those he considers occupiers, to the extent of turning down exhibits with Israeli cartoonists in Europe. “The Dictator’s Melody” in which a uniformed man conducts an orchestra as bombs fall behind them, or “The Weight of Occupation” which shows a bald man carrying a slab engraved with tanks and bombs, fit into Sabaaneh’s main concern – freedom for Palestine. However, he notes, “I think as a Palestinian cartoonist I should not rely on my topic. Yes, Palestine is one of the most important topics around the world, and that has helped me to spread my art all around the world. But as an artist I believe that my art should consist not just of a strong message, but it also should be good art.”

I found the strongest pieces in the show to be two pieces, “Resisting settler colonialism everywhere” and “She carries remembered worlds,” each depicting generic Palestinian people, a man and a woman, with their bodies fading into buildings. Both evoke a strong sense of place and purpose, more so than “Can you chain a heart?”, an image of a heart wrapped in chain. The exhibit also contains a long “History of Palestine Frieze” which is about five feet long and shows a history of the occupation via cartoon figures. Sabaaneh says he plans to do more large-scale works like this, and has recently completed one on the subject of women.

At the exhibit opening, Cartoonist Rights Network International’s Bro Russell interviewed Sabaaneh, who then also took questions. (The Fund has said that a transcript will be soon made available on their website). The audience was made up of students and people already familiar with the Palestinian cause, which Sabaaneh says actually works against him, because most of the people who come to see him at a talk or an exhibit are already convinced and do not need to argue with him or his work. For those not familiar with his work, the exhibit and the book are a good introduction to a world where political cartoonists still matter enough to be regularly threatened with more than job loss.

(This review was written for the International Journal of Comic Art 20:2, but this version appears on both the IJOCA and ComicsDC websites on November 18, 2018, while the exhibit is still open for viewing.)
Posted by Mike Rhode at 9:20 PM