Meet John Darrin: A Chat About His Anti-Trump Cartoon Book 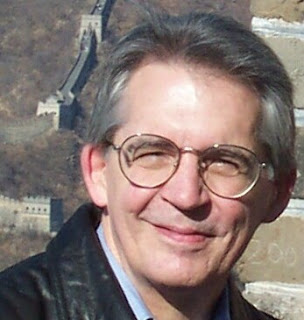 Early this fall, some of my friends among local political cartoonists started telling me that they had a piece in a new book. Author John Darrin commissioned over a score of cartoonists to illustrate Who's That Man with Mr. Lincoln, Mommy? A Parent's Guide to the Trump Presidency. Darrin himself is from Frederick, MD, and local cartoonists in the book are Steve Artley, Barbara Dale, Al Goodwyn, Clay Jones and Joe Sutliff (see the bottom of this post for his list of all the contributors).


Who’s That Man With Mr. Lincoln, Mommy? is a political parody intended to discredit the Trump Administration in a simple, compelling, and entertaining way. Set as a walking tour of the Mall in Washington, DC, two young parents and their children play the alphabet game to explain why President Trump is the greatest. The children unwittingly expose their parent’s absurd explanations with common sense. Interlaced with penetrating editorial cartoons from award-winning artists, this no-holds-barred tale takes us on a journey through the deception and hypocrisy of the Trump White House. 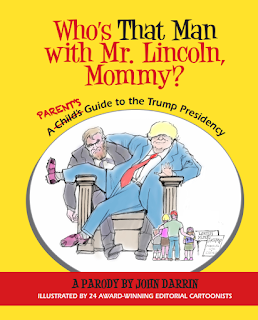 The slim volume (there are only 24 letters in the alphabet after all) features a page of text with an illustration and his imaginary family discussing a word that has gained prominence (or notoriety) due to the Trump administration. The facing page reproduces a political cartoon and a brief biography of the cartoonist.

Darrin was kind enough to send me a copy to preview and answer some questions for ComicsDC.

You're normally a novelist? Why did you decide to write a children's book parody?

Yes, I am a novelist, and also some business-based non-fiction. A parody of a children's book allowed me to present the pro-Trump arguments in the shortest and simplest form and have them rebutted not by partisanship and ideology, but by simple common sense and honest questions.

And why have it illustrated by cartoonists?

I believe editorial cartoons are the most compelling way to instantly communicate complex ideas. And the weakness of a children's book format for an adult is the monotony of the presentation. Letting different cartoonists not only do their cartoons, but also illustrate the story meant that each page brought fresh and interesting imagery. A surprise with each page turn.

How did you find them?

Lots of research and queries. Lists like Pulitzer and Herblock prize winners, the Association of American Editorial Cartoonists, and different cartoon syndicators. Then lots of correspondence to sell the concept.


Did anyone turn you down?

Yes, lots of rejections. It turns out these guys are not sitting around waiting for someone like me to contact them, but actually have jobs and commitments. Who knew? The ones who accepted generally were excited by the concept and the chance to work with the other cartoonists.


You selected various terms for the cartoonists to choose from - how did you come up with them? 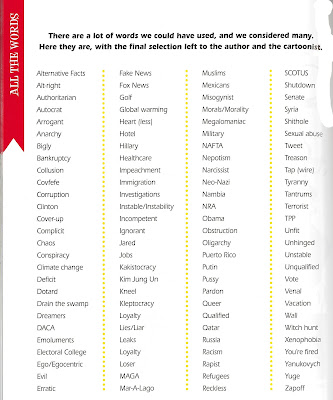 I made a comprehensive list of words that would apply to Trump's administration (page 62 of the book) and picked the ones that I felt were most important. For example. using pussy or Putin as the "P" word was an obvious choice. But I wanted this to be a catalog of Trump's failings and Puerto Rico was no longer on people's minds. With the daily barrage of lunacy, it is easy to forget earlier offenses to the American legacy. Several of my choices were changed by the cartoonist to fit their interests, such as Ingrid Rice, a Canadian cartoonist, choosing NAFTA over narcissism.


Did you write the script first, and give each appropriate page to the cartoonist after they selected a term?

Yes, the story was drafted and then the cartoonists drew to the subject and narrative.


Unlike many cartoon books about DC, the scenery among the monuments is largely accurate even though not everyone is a local cartoonist. Did you provide pictures or art direction?

I mapped out the walking tour of the family and used Google street view to get screenshots of each location and gave them to the cartoonists. That way the story followed a consistent path.


How are you selling and/or distributing this?

The book is available on our website and on Amazon. We have been trying to get it placed in retail stores, but we don't have a wholesaler so we'll continue to work on that.


There are two sequels planned: Who's That Man Scolding Mr. Trump, Mommy?, and Who's That Man Looking So Sad, Mommy?, about the Mueller investigation and the mid-term results, respectively. 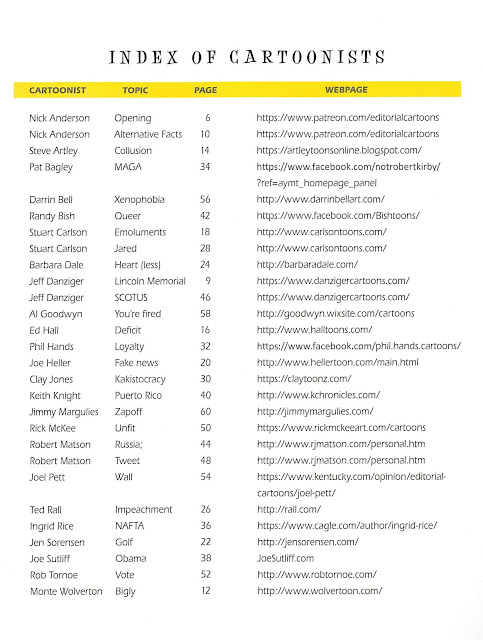