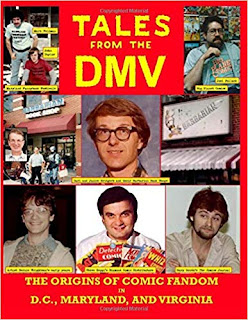 I often... well, every other week... get a book promo in the mail. I'm way behind on reviewing them, but I've got good intentions.
I don't want to wait to mention this latest book:

It's a self-published (through Amazon) history of local fandom and I see a lot of familiar faces and places just on the cover. There was no press release with it, and I hadn't heard anyone talking about it before, but I think it's probably of interest to the hardcore ComicsDC audience. Big Planet Comics in Bethesda has a couple of copies I'm told.
Here's the Amazon description:
Featuring over 500 pictures, TALES FROM THE DMV: THE ORIGINS OF COMIC FANDOM IN WASHINGTON D.C, MARYLAND, AND VIRGINIA showcases firsthand stories from comic book fans of the 1930s through the 1970s, who tell what it was like being a comic collector in the hobby's earliest days: the first comic book stores, the first conventions, and, best of all, the other fans. Be amazed as you read about the Muller brothers and Carl Bridgers and Ted White and Fred von Bernewitz buying comics off the stands in the 1930s, 1940s, and 1950s. Read about the first comic stores in the DMV: Central Books, which opened in D.C. in the 1940s and burned to the ground in the 1968 riots; Carl and Janice Bridgers' Barbarian Book Shop - which opened in 1969 and still operates today as the longest-surviving comic book store in the world; Geppi's Comic World, a chain of eight stores that began in 1974; and Joel Pollack's Big Planet Comics, which has been open for over thirty years. Coverage and pictures of all the early conventions in the DMV are provided as well: Gary Groth and Michael Catron's Metro Cons, Mark Feldman and John Taylor's Maryland Funnybook Festivals, and the University of Maryland's Minicons. Presented also is Bernie Wrightson's early life in Baltimore before he became a world-famous artist, with pictures of him from the early days along with an unedited interview from 1969 and over twenty pieces of his earliest art -- and this includes his very first published art ever, in addition to art he drew for THE BALTIMORE SUN in the 1960s, and the very first story he ever illustrated (the 12-page "Michael Clayton of Galvan" from NOZDROVIA #1), and that story is reprinted in its entirety for the first time. Just as amazing are the publications produced by DMV fans. While in junior high in Virginia, Gary Groth began his 15-issue run of FANTASTIC FANZINE (all issues pictured), and in its pages he gained the skills needed to eventually create THE COMICS JOURNAL, the world's most prestigious professional comic-related publication. Also presented are the complete cover galleries and fanzine careers of Mark Feldman (I'LL BE DAMNED) and Doug Fratz (COMICOLOGY) and the Yancy Street Gang (YANCY STREET GAZETTE), which consisted of Steve Zeigler; Jan Bertholf; and Amy, Jane, and John Hoecker - all of whom were in high school when they created the most popular Marvel fanzine of the 1960s and whose Marvel fan club ranked second in membership only to Marvel's own MMMS fan club at the time. Told here also are the spectacular visits by DMV fans Ted White and Fred von Bernewitz to the EC offices in the 1950s and the visit by Joel Pollack and Al Allenback to the Marvel offices in 1968 to pitch the idea of the first African-American super hero to Stan Lee and Jack Kirby. Their comic, created in 1968 and submitted to Marvel, is published in its entirety (17 pages) for the first time. Presented in this book also is the untold story of Hal and Jack Schuster, two kids from Maryland who formed Irjax Enterprises, a publishing empire and comic book distribution network. In addition, this book traces Steve Geppi's rise to prominence: from his beginnings in Baltimore to his time as a convention dealer and the opening of his first comic book store in 1974 and to the theft of his collection in 1977, and, most importantly, how he became a sub-distributor for the Schusters' Irjax Enterprises, whose company he eventually purchased and transformed into what is now Diamond Comic Distributors, the world's largest distributor of comic books. If that were not enough, the book concludes with a wild firsthand account of a group of Woodward High School students attending the premiere of STAR WARS on opening night at the Uptown Theater on May 25, 1977, an amazing, true story that shows how STAR WARS changed everything. All of these events happened in the DMV, but they are all events that had national significance and that changed the world of comic books and comic fandom forever.
Posted by Mike Rhode at 12:21 PM