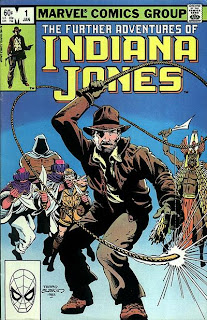 "Bonanza of Indy toys and adventure games," By Joseph Szadkowski, Washington Times May 17, 2008. Back in the day, I bought the Marvel Comics series, which had art by one of my favorite teams, John Byrne with one of comics greatest inkers every, Terry Austin.

Sunday's Post had an article about Indiana Jones, the character, which was interesting even if not comics-focussed: "Indiana Jones and the Meaningless Void: If You Really Want a Quest for The Holy Grail, Try Looking for Significance in an Indy Adventure," By Hank Stuever, Washington Post Staff Writer, Sunday, May 18, 2008; M01.