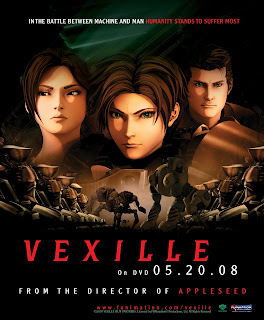 Vexille to be screened at the Japan Information and Culture Center, Embassy of Japan.

The Japan Information and Culture Center, Embassy of Japan in collaboration with the DC Anime Club Present screen Vexille Thursday May 29,2008 6:30 pm as part of inaugural showing for a new film series based on both Anime (Japanese Animation) and Manga ( Japanese Comics).

About Vexille: 2067: Isolation - Japan seals herself off from the eyes of the world in the face of unilateral international policy setting strict limits on the use of robotic technology. The island nation exists only behind a veil of seclusion. No soul shall enter. No soul shall leave.

2077: Revelation - The veil is breached. Japan is infiltrated by agents of the organization S.W.O.R.D., a fighting force operating outside of the protection of the United States and her allies. Their mission: Determine if the Japanese are developing banned robotic bio-technology, forbidden due to its threat to humankind.

In the battle between machine and man, humanity stands to suffer most.

In Japanese with English Subtitles 90 minutes.

This event is free and open to the public. Reservations are required.

For more information please visit the Japanese Information and Culture Center website at http://www.us.embjapan.go.jp/jicc/ or visit the DC Anime Club website at
http://dcanimeclub.org.

DCAC was established in 2003 to introduce and educate people in the Washington,DC area about East Asian culture, through viewing and discussion of Japanese animation (also known as anime) and Japanese comics (manga). DCAC is a501(c)(3) not for profit organization, contributions to DC Anime Club are taxed deductible to the extent allowable under the law.

In addition to our weekly meetings, the club holds an Annual Art Show, an Annual Costume fundraising event, and visits local schools to do presentations on anime. The club also works with the Smithsonian Freer Gallery and DC Asian Pacific American Film Festival on their anime screenings, and has helped locally promote performances for Japanese bands such as Puffy Ami Yumi and Pine am. DC Anime Club was founded by Chris Wanamaker (President), Jules Chang (Vice President) and Craig Vaughn (Sgt in ARMS) on Saturday June 5, 2003. We have a strong membership that continues to grow -- most of which are teenagers.

About Japan Information and Culture Center:
The Japan Information and Culture Center (JICC) is the cultural and public affairs section of the Embassy of Japan in Washington D.C. Our primary role is to promote better understanding of Japan and Japanese culture by providing a wide range of
information, educational services and programs to the public. The JICC is located on the lower level of the glass-enclosed Galleria at Lafayette Centre III in downtown Washington, D.C. Its facilities include a research library, a 152-seat auditorium, and a 1,500-square-foot exhibition gallery where a wide variety of events sponsored by the JICC are hosted throughout the year.
Posted by Mike Rhode at 11:36 AM