OT: Where in the world is Dean Haspiel? 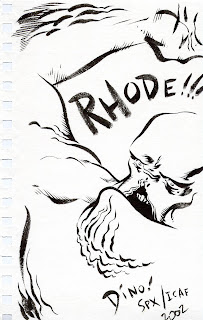 My New York buddy Dean Haspiel, who suggested me for the Harvey Pekar SPX panel interview that led to the Conversations book, is keeping busy. Here's a note from him listing his projects:

1] my webcomic, BILLY DOGMA in "Immortal," got nominated for an Eisner award for 'best digital comic'. Link to IMMORTAL: http://www.act-i-vate.com/21.comic [Mike's note - this is available in print now as well]

2] I finished THE ALCOHOLIC, the original graphic novel I illustrated in collaboration with writer, Jonathan Ames, for Vertigo/DC Comics, which is slated to come out in September. I'll be doing lots of press for that book soon. Here's a recent article from PWCW: http://www.publishersweekly.com/article/CA6557737.html?nid=2789

As always, interested folks should regularly check my blog: http://man-size.livejournal.com/ for alerts and news and occasional, actual real-life blogging!
Posted by Mike Rhode at 6:02 PM

Email ThisBlogThis!Share to TwitterShare to FacebookShare to Pinterest
Labels: Books by my buddies, Dean Haspiel