One is probably bad news:

LOS ANGELES — Retail’s love affair with the DVD is on the rocks and Warner Brothers Entertainment would like to patch things up.

Faced with a decline in DVD sales, Warner Brothers, part of Time Warner, is planning an unusual effort around its upcoming adaptation of the popular graphic novel “Watchmen.” Directed by Zack Snyder and set for a March 2009 release, the big-budget movie tells the story of a group of retired superheroes who are tied to a conspiracy that could change history.

The twist is that Mr. Snyder, known for turning the Spartan comic book series “300” into a global hit movie, is also directing a separate-but-related picture that Warner plans to distribute exclusively on DVD.

The second film, tentatively called “Tales of the Black Freighter,” follows a side “Watchmen” storyline about a shipwreck and will arrive in stores five days after the main movie rolls out in theaters. The DVD will also include a documentary-style film called “Under the Hood” that will delve into the characters’ backstories.

The second, also in the business section, is on a webcomic that I hadn't heard of, and won't be reading:

This Is Funny Only if You Know Unix
By NOAM COHEN
Published: May 26, 2008
XKCD.com is serving up an online comic strip with jokes for a very specific audience: techies.

and the third is on Jamie Hewlett's post-comic book career in animation and is interesting:

Opera Meets Animation to Tell a Chinese Tale
By DANIEL J. WAKIN
Published: May 26, 2008
“Monkey: Journey to the West” is a newfangled sort of opera that is making its American debut at the Spoleto Festival U.S.A. 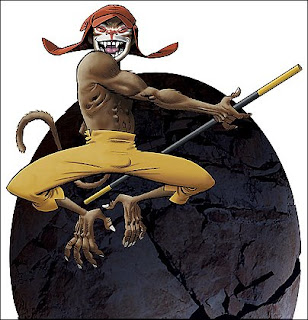 The Post covered this as well, although in less detail - "It's the Year of the 'Monkey' at Spoleto USA: Reinvigorated Festival Casts a Spotlight on Circus-Opera Hybrid," By Anne Midgette, Washington Post Staff Writer Monday, May 26, 2008; C01.
Posted by Mike Rhode at 11:23 AM