Self-righteous but Forgettable - letter on Staake 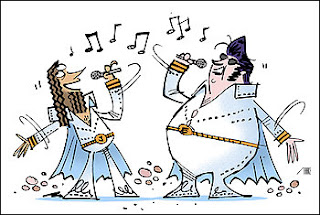 This letter published in the Post refers to the Bob Staake cartoon reproduced above. If anyone can tell me what's blasphemous, I'd be glad to hear a semi-cogent argument. Spare me any righteous angst though please. I really don't understand why the cartoon is worse than the contest.

I was not happy to see a drawing of Jesus in an Elvis Presley-style jumpsuit in the March 1 Style Invitational. As a Christian, I find that blasphemous, and it made me angry with the cartoonist and the people who would publish such a cartoon.

For a second, I empathized with the people who were angry with Danish newspapers that published a cartoon of the prophet Muhammad. Then I remembered that Jesus loves the cartoonist whose work appeared in The Post anyway and expects me to do the same.

Jesus's teachings called for us to love others. What a difference it would make if everyone did that.

Blasphemy is like Pornography. It's in the eye of the beholder. No wait, that's Beauty, isn't it?

Not as beautiful as Blasphemy, but it's up there.

I'm more of a Sacrilege man myself, but whatever makes you happy.

That cartoon made me happy.

to some folks having Jesus having fun, trivializes Him. Jesus never had fun a day in his life - and no doubt Elvis is singing secular songs, another sin as well.
hope this helps explain it somewhat

I believe it is because Jesus was more of a Beatles fan.

Even though they were bigger than Him.

Jesus loves the cartoonist? Are you kidding? I think Elvis kinda took a liking to him at one point, but Jesus?