Last night editorial cartoonist John Sherffius was presented with the fifth annual Herblock Award. Richard Thompson and I were fortunate enough to be able to attend. 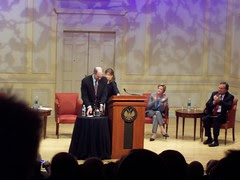 The Herblock foundation fellow introducing Sherffius quoted our link buddy Dave Astor's interview with the cartoonist. She also noted that Sherffius had resigned from the St. Louis Post-Dispatch at the end of 2003 over editorial interference, an account of which can be found in the New York Times. She noted that he had 'entered a body of work' all of which was critical of George Bush, the current. 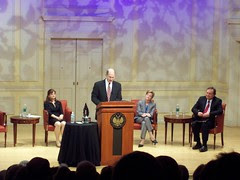 Sherffius introduced his family and then made some excellent remarks (which should be on the Herblock award site someday) saying, "I am angry..." at the Bush administration for a litany of failures and malfeasance including "outright contempt for our Constitution..." I would have voted for him right then, but he followed up with "This is not the America I want for my children; this is not the America I know." He carried onto note journalism's problems, stating, "it is grimly ironic that [while] we have one of the most abusive administrations in power, the press is withering within." 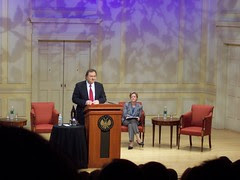 Tim Russert spoke for almost 45 minutes after Sherffius, telling Herblock anecdotes while musing on the role of a free press and its current failures. I'll try to recall some of the anecdotes, but one concerned Russert's predecessor on Meet the Press interviewing Herblock's nemesis Joseph McCarthy. McCarthy had brought a handgun to an interview, and when Russert was telling Herblock about it, Block interrupted to ask "What kind of gun?"

Richard and I accidentally closed down the place while waiting to meet John, who was very pleasant, so we gave him a ride to his hotel and tried to convince him to do some reprint books.

Why is everyone so flushed except me?