Here's some photographs from Adrian Tomine's signing of Shortcomings at Politics and Prose. He spoke for about 45 minutes and you can buy a cd recording from the bookstore. 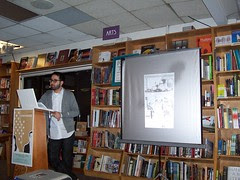 This slide shows a page of original art that he sketched and then changed when inking it. Previous to "Shortcomings" he wrote a full script before drawing anything.

This and the next slide show real buildings he drew. 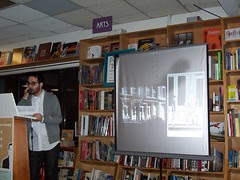 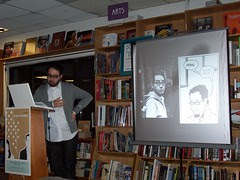 Tomine's been asked if this is autobiographical, partly due to the resemblance you can see between him and his main character Ben Tanaka, "who's a prick". 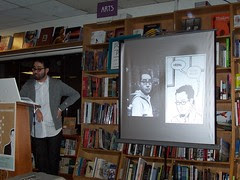 There have been a lot of Tomine interviews done lately (list available on request) and you can see a link to Scott Rosenberg's on this blog. Tomine specifically singled out an NPR one as asking him a question he hates - why he hasn't done more "Asian-American experience" comics. That would probably be this interview -

In Shortcomings, Asian-American graphic novelist Adrian Tomine (Scrapbook, Summer Blonde) has finally done what many fans and critics have suggested he should: addressed race in his work.

Tomine is celebrated for the grace and sophistication of his work; novelist Jonathan Lethem says that "his mastery of literary time suggests Alice Munro," and Junot Diaz says Tomine's "dramatic instincts are second-to-none."

- and of course, one of the four or five questions he got at P&P was this question too.
Posted by Mike Rhode at 10:17 PM