It doesn't appear to be online, but the Post ran a letter to the editor - "Dilbert's 'Jesus'is offensive" by Earl H. Foote of College Park.

You know - the Post's website sucks as far as linking up with the print version. The Washington City Paper ran a good article a few weeks ago as to why that is - the two operations have nothing to do with each other and aren't even in the same state. 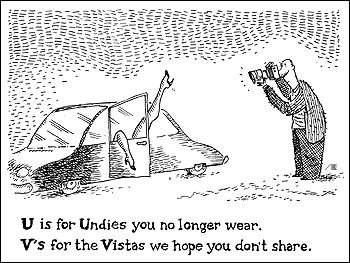 Here's the Gorey contest with the excellent Staake parody cartoon.

Finally Richard Thompson's got one of his excellent Spring cartoons in the Poor Alamanac, but I'm not even going to look for it. And Get Fuzzy complains about the comics page being stuck in 1954.

Tomorrow's book reviews are online as well - The Ten-Cent Plague is reviewed in "Horror! Suspense! Censorship! A cultural critic recounts how comics were ripped out of kids' grubby hands." Reviewed by Dennis Drabelle, Washington Post Book World Sunday, March 23, 2008; Page BW08. The new Kirby book is reviewed in "The Fantastic One: The father of so many superheroes could never conquer the forces of corporate America." Reviewed by Glen David Gold, Sunday, March 23, 2008; Page BW08.