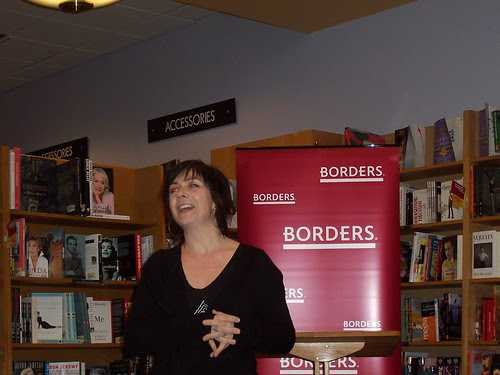 Actually she was there to talk about her new mystery book. I happened to notice this article by Arion Berger, "Plaid, the New Black: Crime fiction writer Denise Mina on the gritty side of Glasgow," Express (March 27): E10 and had a vague idea that it would be interesting so I drove on over. I was the only comics fan in the audience so I didn't ask too many questions especially since I hadn't read her Hellblazer run. DC came to her to write it, and she said that she was surprised because Ian Rankin, Scotland's most famous crimewriter said to her, "How the f-ck did you get that? I want to write comics." Comics are still apparently declasse in Glasgow, and she said, "I also write comics and usually when I say that, one person in the audience kind of goes like that (lifts chin knowingly) because that's what they're interested in. If I was trying to be fancy I'd say graphic novels or something like that, but it's comics I write. I think we should just be out and proud - I write comics."

She was thrilled to be asked she says. She's a Grant Morrison fan and also recommended Sebastian O (that's going back a few years). She gets a comp box from DC and is now reading Love & Rockets as well. Meanwhile Rankin's writing a stand-alone Constantine story (which should be good). 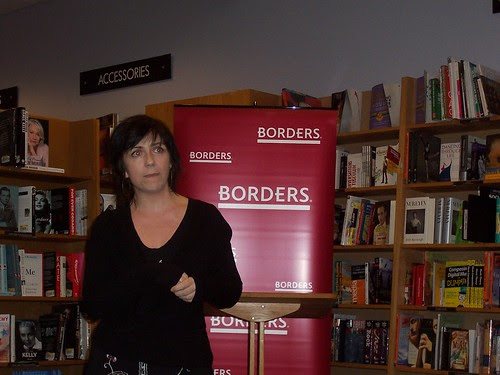 She was very nice and very funny and is doing a new graphic novel for DC on ... high real estate prices. I think we'll have to wait and check it out before seeing how much we can relate to it around here.

Now a pet peeve - these chain stores never get any of the writer's comic book collections nor publicize to the comics community. Borders had one of her two collections and somebody had to hunt for it for me. As I said, I was the only comics fan in the audience (which wasn't large unfortunately0. They had plenty of signed copies of Jodi Picoult's new book for sale from last month, but none of her new Wonder Woman collection at all on the shelves, let alone signed. Is there any wonder that Borders is in financial trouble? But it's not just them - Gene Yang's two earlier books are still available from Slave Labor - why not slap golden stickers on like First Second did and market them as "National Book nominee Gene Yang's..."
Posted by Mike Rhode at 10:06 PM

Sorry that I missed it.

I don't cry too hard at the chains' ineptitude since it helps keep direct market retailers in business. If you want good meat go to a butcher. If you want comics go to a comics store.

Sucks for the creators though.

From the POV of the direct market, I completely agree with you, but it does suck for the creators AND the fans who would otherwise get to see them.