The cover to the Book World is a Jack Kirby homage - there's two reviews in it, as mentioned yesterday - Hadju's 1950s censorship book and Evanier's Kirby book.

And they've got this tiny repro of Richard's cover for the mag. 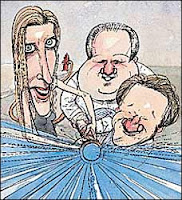