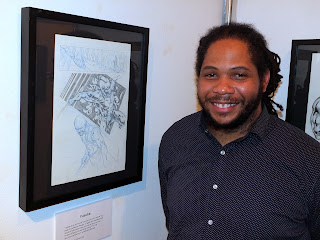 Sean Damien Hill's drawings of African-American superheroes opened this week at the University of the District of Columbia's Gallery 42 (my cell phone pictures are here). The exhibit is open from February 13-28 and solely features Sean's drawings of notable black superheroes. I interviewed Sean just a year ago, and he graciously again answered questions about his new exhibit. (Photographs of the opening reception are by Bruce Guthrie)

Where did the idea of the show come from?

About a year ago Daniel Venne, head of the Art Dept. at UDC had the idea of doing a comic book themed show for Black History Month. We had known each other for some time and he was growing more and more familiar with my work, and he knew I did freelance comic work also.

Is this your first solo exhibit?

Yes it is. I’ve seldom done any art shows in the past. When I did, it was always with a buddy of mine, and I only had include one to three works or something like that. Doing this one was incredible but the anxiousness of it being MY SHOW was crazy. I’m an introvert by nature so I’m never craving that much attention so being the center of it for an art show was wild.

How many pieces are in the show?

How did you find or decide on the characters to draw?

A lot of these characters are some I’ve already been familiar with. All the DC and Marvel comics characters were creations I’ve enjoyed in the past and that aren’t being used to much right now. My favorite from DC Comics is of course Icon from the old Milestone Comics studio (published by DC) in the 90’s and of course Green Lantern John Stewart. Indy characters I included are Dreadlocks from Urbanstyle comics, Vigelance from creator Sean Mack. Anakulapo from Mshindo Kuumba, and of course Sean Anderson from Route 3 from Robert Jeffrey (and me).. I really wanted choose some heroes that are not too well known so it could also be an educational experience. 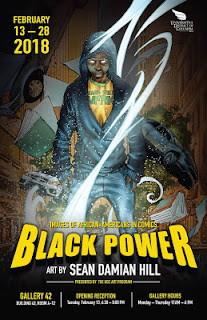 How did you draw them? Digitally, traditionally, or a combination?

The 20 drawings were done traditionally with Pentel brush pens, Copic fine liners on 500 series 11x17 and 16x20 Bristol board. The three colored prints are digital illustrations from the clip studio paint program I use all the time for most of my published work.

What's the difference between drawing digitally and drawing with pen and ink?

For me, it's always more comfortable drawing traditionally, as there is a certain amount fluidity to it. Drawing decisions are made a lot quicker even if I’m building on a lot of rough sketching and ground work to get things going. On paper, I have a better sense of how I’m going to use the space because it’s not something I can change with a zoom key. Overall for me, that’s the down side of drawing digitally, as paper size becomes so relative it’s hard to figure out ( at least for me who draws too many lines to begin with) where to focus more of my attention.

Some of the drawings are done in blue pencil and then inked, can you discuss why you do that?

Traditionally blue pencil was used by artist to avoid the extra process of erasing pencils after inking. It save time because back then most printing was based on photography and cameras couldn’t pick up such a light blue. Now the digital age has caught up to all that, so now it’s more of a preference to better see your final line work over top the initial blue pencil sketch. It’s sort of become ingrained in the culture of comic illustration and digital comic drawing programs like Clip Studio Paint even have an option to turn your linework blue. Even traditional inkers print out pencils in blue nowadays so their line work is a lot clearer.

There are three color pieces in the show, where they done completely digitally?


I noticed the art in the show is for sale. Is there a market for original art drawings? Does this affect the convenience of doing material digitally at sometimes?

Yes, there is definitely a market for traditional comic art. Sometimes a lot of artists who draw pages traditionally will sell the originals after the books published. It’s a major incentive to stick to traditional which is probably why half the artists in comics still do.

Which are your favorite pieces in the show?

I have three. One is Val Zod, an African-American Superman. It has to do with the fact I drew him as though he’s contemplating something; narrative is huge when doing any illustration and if you can portray that, it tells something about the subject. The others are Sean Anderson from Route 3. And Icon, my drawing is literally a man with the weight of the world on his shoulders.


Can you tell us more about your superhero character?

Yasuke is my love letter to all those Hitori Hanzo, Mifune and Highlander movies I watched as a kid. He is based on the real Yasuke who was an African slave made a samurai during Ido-period Japan. In my story he is an immortal cursed to make amends for serving an evil emperor. His journey is about moral questioning and if there is an objective right or wrong. Through that journey he discovers the reason for his curse.

Did you grow up on superhero comics? If so who are your favorite characters? Favorite creators?

I was raised around comics like Avengers, Teen Titans, Legion of Super-Heroes, with plenty of Batman and Superman too. My mom and grandpa would read them all the time. Grandpa actually introduced books like Will Eisner's the Spirit and Dick Tracy to me, and Mom loved the the Avengers and Teen Titans.

My favorite heroes have always been Batman, Icon, and Magneto (even though he was a villain). 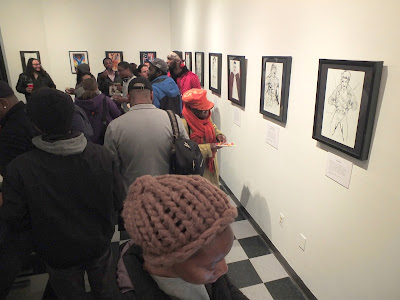 Who or what would you like to work on from one of the major publishers?

If I had a chance, I’d love to do Luke Cage or Black Panther, and Batman of course, but even to have a shot at Superman because it would be fun drawing that giant square jaw and boy-scout smile.


What are your thoughts about African-American representation in the comic books?

Well of course I’m all for it. Our media reflects our world and our beliefs. If we have different types of heroes in our media, it’s only because we believe different types of people can have a great potential, and even reach that potential. But if we only see one type of people in that role throughout our media, it’s then widely believed, at least on a subliminal level that only that particular kind of people have that potential. And that sends a sign that the rest shouldn’t bother.

On there other hand, I do think diversity in comics is a bit larger than what people credit, where some are just looking in the wrong place. I really believe if the audience gave more attention to Indy titles they might find the type of diverse storytelling we all need. It’s getting easier to self-publish nowadays and people have a lot of stories to tell.

Typically when someone says they want diversity in comics, it’s really a lot of the time just wanting the big two (DC and Marvel) to deliver it, but those companies have heroes that had been created and gained a lot of footing during a time where diversity was not on the table. Now to be fair, those companies have tried to diversify their heroes, but it’s often nothing original and usually a repackaging of something they already have. To me that’s not true diversity, because it can both hurt the fandom that loves that particular hero and also tells the audience being catered to that they aren’t worth investing in a new hero for.

Do you think the race of the writer/ artist should be under consideration when it comes to drawing an African-American character?

I won’t say who should be hired for what, but I think we have a responsibility help create a culture of diverse creators behind comics. Right now it’s still widely white males on the credits of most mainstream titles. I’m not saying a white writer couldn’t do a great Cyborg story because Marv Wolfman did and white creators are responsible for Black Panther, Luke Cage, Spawn, Misty Knight ... a lot of those characters [in this exhibit]. But we should create a culture in comics where the creators are diverse just like the world we live in.

The Black Panther movie obviously has the issue of black superheroes on everyone's mind right now; are you interested in seeing the movie?

I am, and I’m very interested to see how it’s going to effect our medium afterwards. I know it won’t make book sales jump and stay steady, because none of the movies have been able to increase comic readership for the long term. But it’s definitely going to have an influence on how diverse stories can be told. Ultimately though, it;s up to us to determine what impact this really has, but so far it’s really hopeful.
Posted by Mike Rhode at 1:08 PM