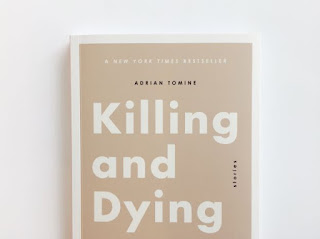 If I had to come up with a quick descriptive word for Adrien Tomine's work (and I just did), I think I'd pick "astringent." Tomine's a master of a cool thin line with a flat color palette, and his stories are often about people you'd prefer to avoid IRL. Tomine will be in town at Politics and Prose talking with Linda Holmes about Killing and Dying, his 2015 collection of his Optic Nerve comic book now available in paperback.

I'm reviewing the book now, even thought I bought it at 2015 at the Small Press Expo, because Drawn & Quarterly sent me a comp copy, and I don't want them to think it was unappreciated. Also, because in spite of my description above, I like his work. There are six stories in the book, all obviously by Tomine, but all different from each other as well.

Tomine is one of the group of formerly alternative 1980's cartoonists such as Daniel Clowes and Chris Ware who've hit the big time, and whose work is now instantly recognizable, as they're doing regular covers for the New Yorker and publishing graphic novel collections on a regular basis. This is a far cry from when they all were part of the small press scene being published in 'floppies' by Fantagaphics Books. Amazingly, those who've stayed in the field have largely remained true to the aesthetic they developed in their early works.

Tomine's first story, "...Horticusculpture" is purposely constrained to appear to be a weekly comic strip telling the story of a man growing old while attempting to convince the world that his new plant/sculpture hybrid is art. Six "strips" in black & white mimic a daily, while the full page Sunday is in color. Someone more academically-minded could theorize about the appeal of old-fashioned comic strips for alternative comic book cartoonists; among others, Daniel Clowes did a whole book using this motif, as did Bob Sikoryak who cast his net of influences a bit wider in his book on Apple. In the end, Tomine's story is about a man who's largely a failure personally and professionally, but is redeemed in the very last panel by his family's love.

Local cartoonist Dana Maier told me yesterday that "Killing and Dying" is her favorite story in the book, but I had to dash off before we discussed it. We may have that conversation here, if I can convince her to. A part of another dysfunctional family, a teenage girl wants to try standup comedy, and her mother agrees while her father thinks it's a mistake. Tomine has put several twists in the story, so that's all I'll reveal. Finally, "Intruders" is from the point of view of a failed veteran who breaks into the apartment he used to live in during the day, attempting to recapture his happier past, while providing no trace of himself in the present.

Tomine's cool, cerebral stories won't be to everyone's taste, but they're definitely worth sampling and this is a good collection to start with. He's grown to be an assured artist and writer, and will continue to be part of the graphic novel 'canon' for years to come. 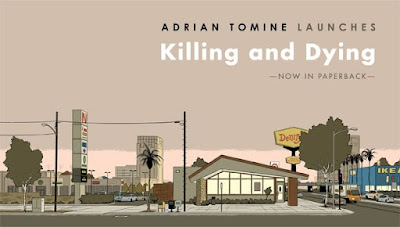 
Saturday, February 10, 2018 - 6 p.m. to 7 p.m.
Now available in paperback, this collection of six graphic stories shows the impressive range of Tomine’s narratives and his expressive use of line, color, and half-tones. Especially adept at capturing the nuances of character and emotion, Tomine, author/artist of Shortcomings and Scenes from an Impending Marriage, is one of the most literary of graphic storytellers. Many of the pieces here chart the turbulent arcs of relationships in which the partners are angry, disoriented, or both. In one variation on these themes, the title story focuses on a fourteen-year-old aspiring stand-up comic. As her mother praises her and her father criticizes her, the three work to deny the greater tragedy that is about to befall the family. Tomine will be in conversation with Linda Holmes, writer and editor for  NPR’s entertainment and pop-culture blog, Monkey See.

This event is free to attend with no reservation required. Seating is available on a first come, first served basis.
Click here for more information.
Politics and Prose at The Wharf   70 District Square SW   Washington   DC    20024