This issue features an exclusive essay, introduced by Quarterly Editor William Seale, on Pulitzer Prize-winning cartoonist Pat Oliphant, who has covered ten presidencies and over the course of half a century, has become the best-known political cartoonist in the nation. This look at Oliphant's philosophy includes a selection of his work, from the Johnson to the Obama administrations. 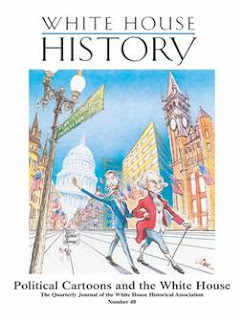 Other highlights include:
Elaine M. Gibbs, consultant and collections assistant in the Office of the Curator at Blair House, explains how political cartoons first emerged in a newspaper in the 1830s, when the Washington Globe began publishing cartoons that promoted President Jackson's programs and the Democratic Party's agenda to voters of all socioeconomic classes.

Mike Rhode, a member of the National Cartoonist Society, provides a history of the political cartoons famously featured on the walls of Off the Record. He describes how the collection began and highlights the cartoonists whose work is exhibited. Interviewed in this article are three Pulitzer Prize-winning cartoonists whose cartoons are the latest editions to the collection: Matt Wuerker, Ann Telnaes, and Kevin Kallaugher.

Jessie Kratz and Martha Grove of the National Archives discuss Clifford K. Berryman, one of the most renowned political cartoonists of the 20th century. The whimsical style of Berryman's cartoons earned him respect, rather than ire, even though he satirized leaders and politicians from both the United States and abroad. For over fifty years, his cartoons—many featuring his iconic Teddy Bear—appeared on the front pages on Washington newspapers.

Since the 19th century, political cartoons have been used to praise and criticize administrations, and this issue provides a glimpse at the relationship between notable political cartoonists and the White House.