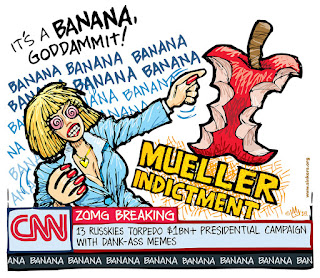 Welcome once again, folks, to the latest episode of Russiagate Nothingburger! According to the venerable CNN and Washington Post, a billion-dollar plus major Presidential election campaign was basically blown over by 13 people with a bunch of weak, dank-ass memes.

Needless to say, this mess was revealed to a big, hot, sloppy bucket of nothing in record time -- the total cost of the dank-ass meme campaign turned out to have been about $500k* (David Brock's "Correct The Record" spent millions to troll and harass Leftists and Sanders supporters), the dank-ass memes in question had a reach of about 1%, most of the dankness wasn't even seen until after the "election", and the indictment contained no evidence of the "election" being affected in any way regardless.

Jeezus, man; the Democrats must be getting pretty goddamn bored with all that winning, huh?