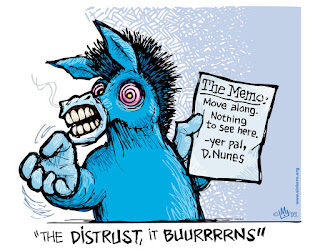 For something that's supposed to be a such a big ol' hot, sloppy bucket of nothing, the infamous Nunes Memo sure has the Democrats screeching about how it's sowing "distrust" of institutions like the FBI. Yep, Liberals love them some FBI now, just like ol' Phil Ochs said -- 10 degrees to the left of center when things are good, 10 degrees to the right when it affects them personally.

Now, as someone who's been involved in Left activism and activist media for nearly 40 years and knows the FBI's history of disrupting and suppressing popular movements, I can tell you for free that I don't need some babbling memo from a GOP Congresscritter to make me fervently distrust the goddamn FBI. Really, folks, let's get serious, here. They have a history.

Between this drooling love for the State and feverishly trying to rehabilitate George W. Bush, I'd say the Democrats are pretty well cracked.
Posted by Mike Rhode at 9:03 AM