Meet a Local Comics Writer: A Chat with Leslie Tolf 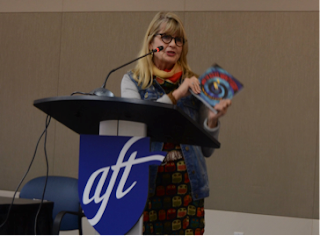 I met Leslie Tolf last week when I was at Politics and Prose last week for the book-signing by Laurie Halse Anderson and Emily Carroll of their collaborative Speak: The Graphic Novel* and began talking with fellow line-standers as one does. Leslie told me she had written a graphic novel, and pulled a copy of her book from the shelves, which I then bought (but haven't read yet as there are too many signings to go to), and then she agreed to do our standard interview. It all happened roughly like that, and it makes me glad I live around DC where interesting people are everywhere. 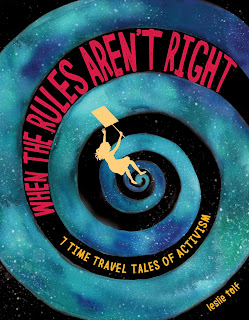 What type of comic work or cartooning do you do? Your website describes When the Rules Aren’t Right, as "a graphic novel for all ages. It is the story of Emma, your basic fed-up teen, tired of parents who only talk about work and money, a self-obsessed older sister and a college-educated brother who’s moved back home and seems destined to stay there. She hates her chores, her know-nothing classes and she’s oblivious to the bigger world out there that could use her help."

I wrote When the Rules Aren’t Right, a graphic novel about worker’s rights and activism, because kids under 20 are now growing up in this country without the job safety net that was essentially created by  decades of struggle by unions and other progressive groups.

I always loved the Toni Morrison quote, “if there’s a book you really want to read, but it hasn’t been written yet, then you must write it.”  I had been thinking about this book for 10 years, but when I left my CEO job it took exactly 9 months to write it.  Literally, a "labor" of love. 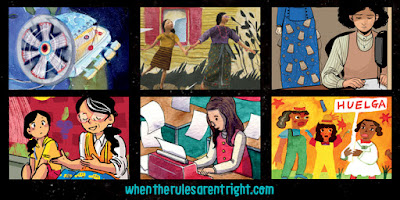 How do you do it?

I began my career in DC as a graphic designer in my 20s, but knew I wouldn’t be good enough so I went on to get an MBA and became CEO of a labor organization, called Union Plus.  I was able to do thumbnails of When the Rules Aren’t Right, based on my rusty art skills.

I felt it was really important to have women illustrators, and in particular women of color. So I decided I would follow Neil Gaiman's Sandman approach, and have each chapter illustrated by a different illustrator, but ones who were female graduates of either RISD or School of Visual Arts.


Being a female CEO in the union movement for two decades, I felt the (not-so) subtle discrimination of a leadership structure to this day dominated by white men. In my encore career as a graphic novelist, I feel it’s important to help people of color and women rise up in this very impactful medium of graphic novels.


If you're not a DC native, where were you born?

I am a stereotypical Midwesterner, born and raised in the Chicago suburbs while never using four-letter words.  As such, I was living in a white middle class “bubble” until I went to college and moved to Washington, DC.  Working in labor unions, and with non-profit organizations, opened my eyes to the vast inequities of the system.  As Alice Walker said, “activism is the rent I pay for living on this planet.”

I live in Brookland after two decades on Capitol Hill, and I feel I’m finally home.
It is a kaleidoscope community of colors, religions and ages.  It has a thriving art platform with the Arts Walk, Dance Place and Bluebird Yoga and Arts Center.

Oooooo! Favorite question. Neil Gaiman and the Sandman series was my portal in, but here are some current idols:

And I’m a big nerd of zines and the zine community.

I’ve recently been asked to do a graphic novel series based on When the Rules Aren’t Right, on issues like animal activism, environmental concerns, civil rights, and women’s rights. A kind of "Magic Treehouse Kids Grow Up and Become Radicals!" Graphic novels aimed at a middle-school ages (8-15) can be explosive as this is when kids are exploring their truths, and seeing injustice in this world. They’re optimistic and engaged.

It’s funny, I just bought Daniel Pink’s new book, When: The Scientific Secrets of Perfect Timing, and it’s confirmed what I’ve experienced.  Write in the morning.  And be aware of your personal energy slumps (mine are right after lunch).  If you can swim with the tide, it’s much easier.  Other than that, more coffee.

This is a cheat but my favorite museum to take visitors to is the Visionary Art Museum in Baltimore. It blows everyone’s mind, and it has the best museum shop in the country.


How about a favorite local restaurant?

I have to give a shout out to Brookland’s Finest, the BBQ is amazing. Also Fox Loves Taco, near the Arts Walk.  I also love to hang out at my local college bookstore, Barnes and Noble, where the staff are super-smart and make a mean cappuccino with suger-free vanilla.


Do you have a website or blog?
I have a website and Facebook page.  But most importantly, I’d love to continue my school road trip around the country. If you have ideas, ping me at leslieatolf@gmail.com.
*transcript coming soonish, since P and P didn't record the session for their own site.