There were a LOT of cartoonists at the Trickster anthology launch at Big Planet Comics yesterday. I only got to talk to a few of them, but I'm going to run a series of Chat with a Cartoonist talks over at the City Paper with them over the next month. The book looks very good - it's published by Fulcrum, a specialist in American Indian books, but a newcomer to comics. I did buy a piece of art from Jacob Warrenfeltz of Takoma Park - the story he drew was about a trickster rabbit and two buffaloes. 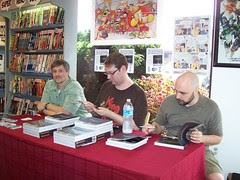 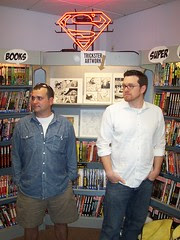 (left) Mike Short, (right) Evan Keeling. Coincidentally, the piece of art I bought is the one between the two of them with the cardboard arrow pointing at it. 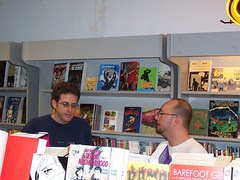 I completely spaced out about this, but I'm in the process of moving (like 2 blocks away, but still, moving is moving) so I guess it's OK I forgot. Still, I do plan on picking up this anthology soon. It sounds like it's great.