As requested by no less than Richard Thompson, here are pictures from the recent Funny Times subscriber party in Arlington, which featured the first Irving Award presented to Matt Wuerker. The Irving Award is named in honor of publisher Ray Lesser's father, and his large collection of trophies, that Ray intended to regift, but never quite got around to. I'd like to thank Ray for making me welcome, and to note that I retroactively became a subscriber, especially since the magazine supports our local cartoonist Matt. 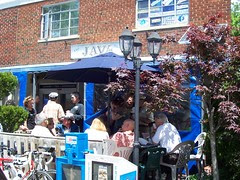 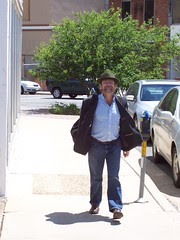 Matt and the hat. 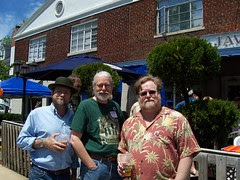 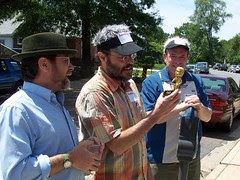 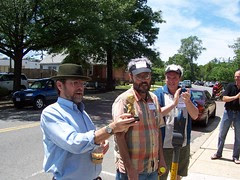 Thanks! I wish I could wear a hat with that much panache.

Yeah, me too. We did agree that it was a bit hot for the weather, but a fine hat, nonetheless.

Nonsense! I'm sure you both could pull off chapeaus!
I have to admit that I got that one from my dear old ma. She's got a fine sense of style.

Those are dandy pics, Mike. Would you email me higher res versions? I want to show my ma. She doesn't believe me when I tell here I wear the hat all the time.

Thanks so much for these pictures, Mike. Come visit us in Cleveland and see the birthplace of Superman (and the Funny Times World Headquarters, now on sale for only Headnickels).