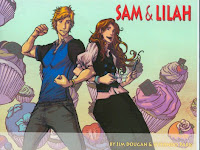 Jim Dougan and Molly Lawless were at Fantom Comics for Free Comic Book Day and Jim passed along his ashcan Sam and Lilah. He wouldn't sell it to me, so I told him I'd review it and he passed it over. Jim's the writer and Hyeondo Park is the artist. The story is actually a webcomic on Act-I-Vate.com and this mini is the first chapter.

I liked it a lot. Jim's retelling a version of Samson and Delilah as a romantic comedy starts off sweetly. Park's manga-influenced art is excellent, with an interesting color palette. Both main characters are appealing, and their decision to try to date, in spite of... ok, it's a gypsy curse, but still... makes me want to read more. You can read both chapters online and Jim's says they're putting together a large-size collection so you can see the art better. The second chapter takes place during a DC United Soccer game at RFK Stadium here in DC too.

Another mini I picked up is How I Lost My S#?! at the Apple Store by Jim and Molly Lawless. I really liked this autobiographical comic about Jim's problems with installing an Airport Wireless Card in a Mac. You should be able to pick it up at www.chemsetcomics.com For the record, after you read the story - I believe Jim was in the right and Apple should be ashamed.
Posted by Mike Rhode at 8:02 PM

Thanks for the ink, Mike! For the record, the Apple Store comic can be read for free at The Chemistry Set (www.chemsetcomics.com), where you can also see that the majority of commenters felt, shall we say, a little differently than you did. If someone wants a physical minicomic, they can hopefully catch me at the MoCCA Festival in NY on June 6+7, or at the Baltimore Comicon in October. I'll be at SPX, but only for one day, sort of wandering around.