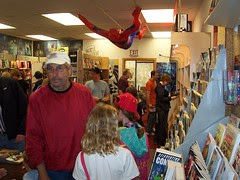 FCBD seemed to be a success in the area. I went to three stores, along with my daughter, a neighbor, and his daughter. 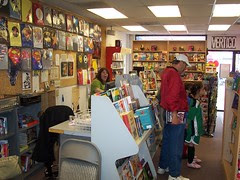 Big Planet Comics Bethsda, with Lee screaming behind the counter (I guess someone started changing without using the phone booth).

We began with Big Planet Comics Bethesda which was as crowded as I'd ever seen it. Already by 11:30 they had run out of adult packs of comics, even though they only opened at 11. Many of the people coming in had children with them and appeared to be coming in solely due to FCBD. 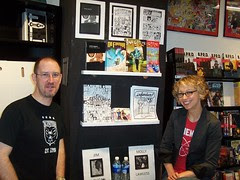 Jim Dougan and Molly Lawless and their comics.

We next went to Fantom Comics in Tenleytown which had three cartoonists appearing - writer Jim Dougan (see his new strip on Act-I-Vate), Molly Lawless and Arvid "Rex Mundi" Nelson. Molly had 3 comics books for sale, 2 of which were minis. I bought a complete set (and one for Michigan State's Comic Art Collection). Jim had 4 comics, all of which I had already. You should buy them though, right Jim? Arvid Nelson had a stack of his 5 Rex Mundi collections so I bought one of each and hope to start reading them this week (along with the preview comic Jim gave me). I wasn't wearing my reporter hat, so all I can report is that Hollywood's interested in a Rex Mundi movie (duh) and he's happy with his publisher, Dark Horse. Actually I cut in front of a guy with dozens of comics he was having signed (with his permission) and then some other people were buying trades so I didn't linger at the table. 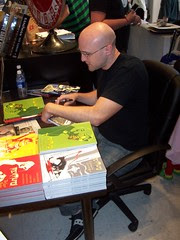 Unfortunately, Fantom is having a 50%-off moving sale so I also bought a stack of comics 3 feet high so... However, my friend Chris has already started on his stack of five AND has been able to tell a co-worker that he saw her spouse's favorite comic book writer while he had to stay home to try to sell his house - a ridiculous excuse (my wife has been harping on seeing Stan Lee when I didn't for over 20 years now). 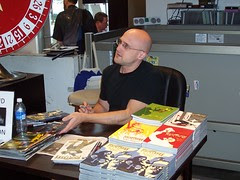 We ended up checking in with Big Planet Comics Georgetown where they said they'd had steady foot traffic, although not as crazy as Bethesda. They still had a few packs of children's comics and gladly contributed one set for the Library of Congress (although Sara Duke may have gotten her own set in which case another library will get them). 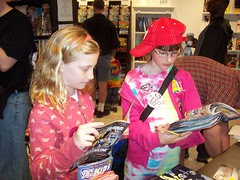 There are more pictures in this photo set on Flickr. 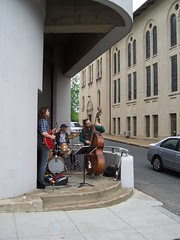 The band at Fantom Comics.
Posted by Mike Rhode at 8:26 PM