2019 saw three sequels to 1986's Watchmen by Alan Moore and Dave Gibbons, one of the most seminal works in English language corporate super hero comics. One of those sequels was a live action television show on HBO. One of them was Doomsday Clock, the overt incorporation of the Watchmen characters into the larger DC comics universe. And one of them was Peter Cannon: Thunderbolt by Keiron Gillen and Caspar Wijngaard. Full disclosure: of these, I've only read the the latter, mostly because it was the only one of interest to me. 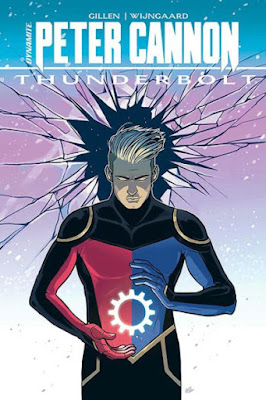 Since it's release, one of the things that made Watchmen stand out from the very crowded field of superhero comics was it's one-and-done status. There were no prequels, sequels, crossovers, or spin-offs (but plenty of parodies and homages). The corporate lore from DC Comics holds that the main reason for this was Paul Levitz, who was the president of DC comics from 2002-2009, although he had worked at DC Comics for 35 years in a variety of roles.

Three years after Levitz left, DC Comics announced that they were going to create a series of prequel comics that nobody was asking for. The prevailing theory was that the corporate overlords couldn't handle the fact that they had a very successful property on their hands that they hadn't fully exploited. The whole thing is a very sad cautionary tale about the work-for-hire nature of creating new characters for corporate super hero comics companies. 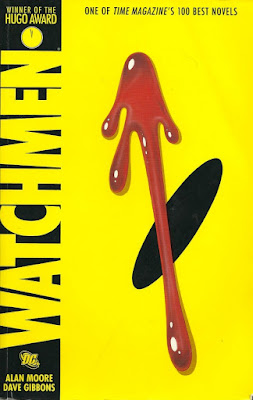 Each of the three sequels completely ignores this behind-the-scenes history. But only Peter Cannon: Thunderbolt actually attempts to grapple with the artistic legacy of Watchmen. Watchmen, for those who have never read it, is a formalist masterpiece, built around a nine-panel grid. Many creators have cited (or overtly copied) Watchmen in their own works over the years. Gillen takes aim at this aspect of the work and ruthlessly interrogates it, to astounding effect.

The original plan for Watchmen came from the fact that DC Comics had acquired a set of characters from Charlton (another comics publisher) and wanted Alan Moore and Dave Gibbons to do something interesting with them. Moore and Gibbons eventually created new characters based on the Charlton characters so that DC would have the option of doing something with the characters in the future. This gave Moore and Gibbons room to do something permanent without worrying that future continuity would reverse it - a surprisingly common occurrence in super hero comics.

For Peter Cannon: Thunderbolt, Gillen and Wijngaard uses those same Charlton characters (or rough analogs of the same), but based them on the variations that were created by Moore and Gibbons. It's a clever trick, one that skirts the whole "official sequel" issue (Peter Cannon: Thunderbolt was published by Dynamite, a comics company that has no connection to DC Comics) and, like the original decision made by Moore and Gibbons, gave Gillen and Wijngaard more room to maneuver.

Utterly unlike the intricate complexity of Watchmen, the plot of Peter Cannon: Thunderbolt really doesn't matter. The generic super hero tropes provide a series of events for the formalist commentary to sit on. From the very first panel on the very first page, the creators make it obvious that this work relies heavily on the reader's remembrance of Watchmen itself. In fact, there are several pages that are shot-for-shot replications of specific pages in Watchmen. 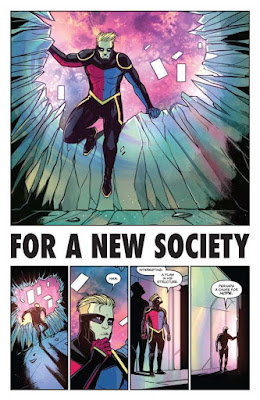 As the pages turn, this becomes even more explicitly a work aimed at insiders. Entire lines of dialogue are lifted (and mangled) from Watchmen for very specific reasons. And then, in the fourth episode, the title character lands in an a scene that is completely illustrated in black and white, an obvious and overt homage to the "slice of life" comics of Eddie Campbell, with whom Moore worked on From Hell. This gets even more explicit when Campbell himself shows up and tries to start a fight with the main character, who is still wearing his superhero outfit. The best part of this sequence is a cameo appearance from Moore himself.

Gillen proves that he's got a solid understanding of the formalism inherent in the nine-panel grid, as well as the metanarrative tricks that one can play with, if one has the inclination. And Gillen clearly has the inclination. His message is very clear: since it's publication, Watchmen has cast an oversized shadow on corporate super hero comics and, maybe, we might should find something different to fixate on. Any day now.

From a content perspective, I happen to think he's absolutely correct. The term "grim and gritty" came out of work like Watchmen and The Dark Knight Returns, which came out the same year. Grim and gritty superhero comics became a scourge on the marketplace in the 90s and are only now starting to peter out.

On the other hand, I'm not sure I agree with Gillen's thesis that maybe we should let the formalism of Watchmen go as well. The nine panel grid is a natural fit with the size and shape of a modern comic book page. Frank Santoro's Comics Correspondence Course preaches an eight panel grid because it removes the requirement for early creators to have to come up with a layout - effectively, one less decision to make. The argument for the nine panel grid is more or less the same, with the added benefit of giving the page the timing of a waltz - one, two, three, one, two, three, one, two, three. It is increasingly unlikely that such basic grids will ever really go out of style.

All in all, Peter Cannon: Thunderbolt is a very interesting piece of work. Unfortunately, it requires the reader to have a very deep familiarity with Watchmen to really "get" the point. Fortunately for the creative team, Watchmen is so ubiquitous that most readers have probably already done the prerequisite reading. It's ironic that Gillen would rely so heavily on the tropes in Watchmen to make the argument that it should not have the influence it currently has.

Peter Cannon: Thunderbolt was originally serialized in five issues. The collected edition, in hardcover, was released in early January of 2020. It's unclear why the collection was issued in hardback instead of the more common softcover, but this reviewer suspects that it had to do with capitalizing on the higher price point.

If you are a reader with fond memories of Watchmen, but are more interested in the formalist aspects of the work than the ongoing integration of the characters into the ongoing DC Comics universe, this comes highly recommended.
Posted by oletheros at 9:05 PM