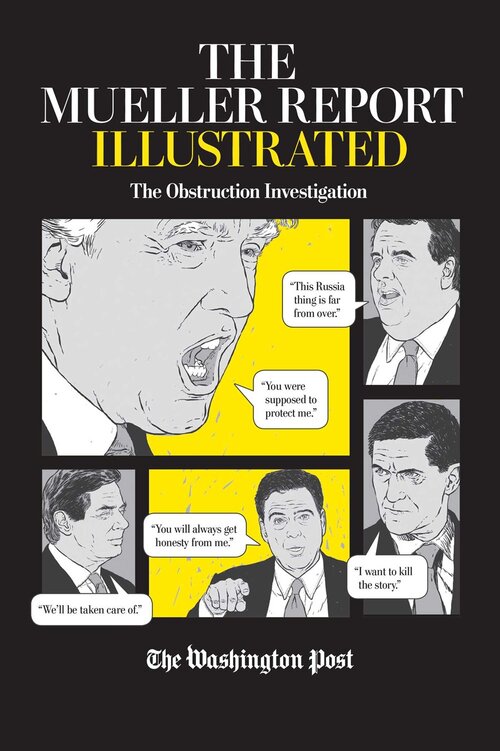 Join us in welcoming The Washington Post's Rosalind S. Helderman, Matea Gold and Katherine B. Lee for a conversation about "The Mueller Report Illustrated," a new graphic nonfiction book. Written and designed by The Post and illustrated by artist Jan Feindt, "The Mueller Report Illustrated: The Obstruction Investigation" brings to life the findings of special counsel Robert S. Mueller III and illuminates a crucial period in the Trump presidency that remains relevant to the turbulent events of today. The book unspools a dramatic narrative of an angry and anxious president trying to control a criminal investigation into his own actions, with dialogue taken directly from the special counsel's 448-page report. "While the storyline is eminently faithful to Mueller's more detailed documentation, the writers and artist bring drama to it by showing the many points of resistance within Trump's staff," Kirkus Review notes. The Post journalists will discuss how they tackled this groundbreaking project, how the Mueller probe eventually led to the impeachment inquiry and how the Russia investigation is still reverberating today.

About the speakers: Matea Gold Matea Gold is the national political enterprise and investigations editor for The Washington Post, where she plays a leading role guiding some of The Post's highest-profile stories. Before moving into an editing role in 2017, Matea spent two decades as a reporter, covering money in politics, presidential campaigns, Los Angeles City Hall and television media, among various beats. She joined The Post in June 2013 after 17 years at the Los Angeles Times and Tribune Publishing. She graduated from the University of California, Los Angeles, where she served as editor-in-chief of the Daily Bruin.

Rosalind Helderman Rosalind S. Helderman is an investigative reporter for the national political staff of The Washington Post. A reporter for the Post since 2001, Rosalind has helped cover two presidential elections and the US Congress, as well as local news in Virginia and Maryland. She was part of a team of reporters awarded the Pulitzer Prize in 2018 for coverage of Donald Trump and Russia and is a two-time recipient of the Polk Award for investigative reporting. She grew up in Nashville, Tennessee, and is a graduate of Harvard University.

Katherine Lee Katherine Lee is an art director and designer at The Washington Post, where she designs for various cross-platform projects and products. She helped launch the visual style of The Post's Snapchat Discover page in 2017, and in 2018 she redesigned The Post's newsletter brand suite. Her work has been recognized by the Society of News Design, and she served as a judge for the Society of Illustrators competition. Before arriving at The Post in 2016, Katherine worked at the Boston Globe and Globe Magazine. She graduated from the University of Miami with degrees in advertising and psychology.

This event is free and open for all to attend! Kindly RSVP here!