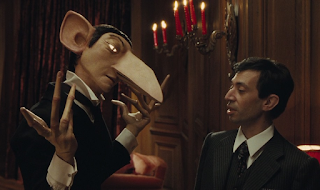 Gainsbourg (Vie héroïque) by Joann Sfar follows the famous French singer's upbringing in occupied France, his first successes and complex love affairs. An audacious portrayal of the charismatic singer's life, Gainsbourg is unconventional and imaginative in its use of fantastical elements representing the singer's conscience at very crucial moments of his life. Perfectly embodying the dramatic intensity of the movie, the soundtrack includes many of Gainsbourg's most famous songs.
Posted by Mike Rhode at 7:31 PM