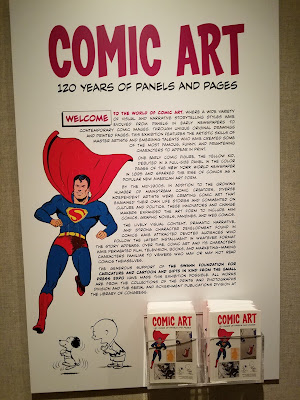 Since I am friends with all four of the curators of the exhibit, consider this more of an exhibit overview rather than a review. Located in the historic Jefferson Building, the site of many fine exhibitions besides those of comic art, the Swann Gallery’s exhibits are always interesting and this one is no exception. The exhibit showcases highlights of the Library’s collection of comic art, meaning in this exhibit at least comic strips and comic books, including its very latest forays into collecting.

The exhibit is divided rather arbitrarily into five sections – “Early Years: 1890s-1920s,” “Mid-Twentieth Century: 1930s-1960s,” “Late-Twentieth Century and Onward: 1970s-2000s,” “Comic Books and Beyond: 1940s-2000s,” and “Webcomics.” Although the sections are clearly delineated on the website, this is less true for the actual exhibit except for the comic books which are displayed in cases in the middle of the gallery, and the webcomics which are on a screen by the exit door. 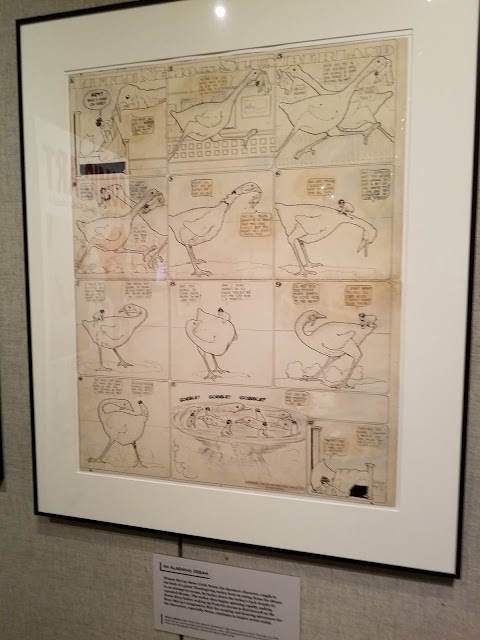 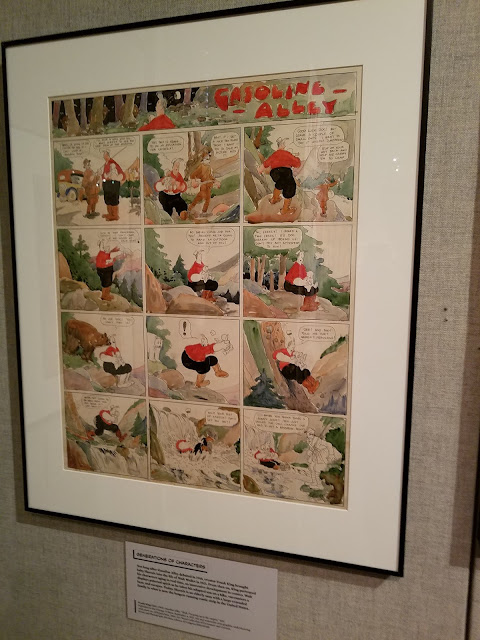 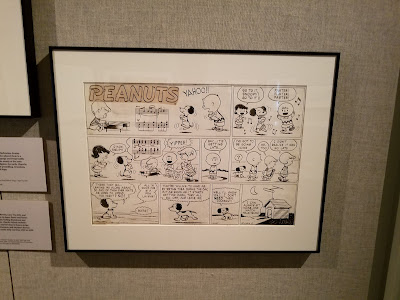 Taking the three original art sections first, there are some very good original cartoons on display, beginning in Early Years with the copyright drawing for the Yellow Kid, and originals from Winsor McCay, Frank King’s Gasoline Alley, George Herriman’s Krazy Kat, and some tearsheets from the Geppi Collection. The next section has a fine Batman & Robin page, a lovely Burne Hogarth original of Tarzan, and an early Peanuts original, although the Hulk page by Marie Severin has been shown too many times in recent exhibits. The latest section definitely plays into the interests of the two curators. There are two 9-11 pieces, one from Will Eisner and one from Alex Ross that were collected after that tragedy, a Sunday strip from local cartoonist Richard Thompson’s Cul de Sac, a page from the New Yorker's Chris Ware, items from women cartoonists Trina Robbins, Lynn Johnston and Marguerite Dabaie, and posters and prints from the Small Press Expo collection. 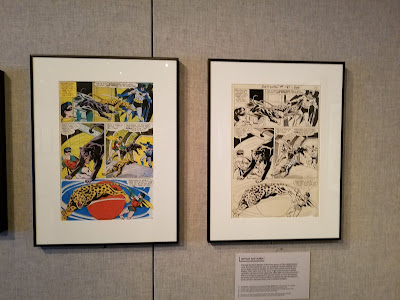 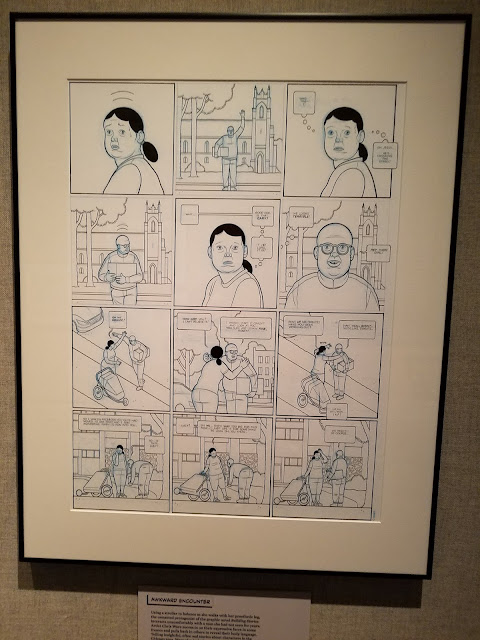 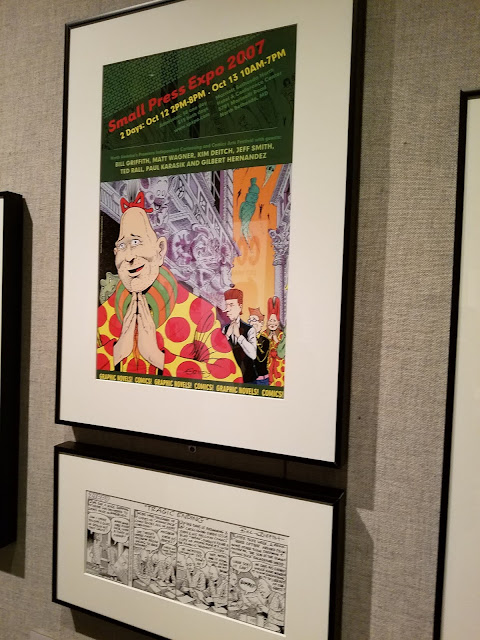 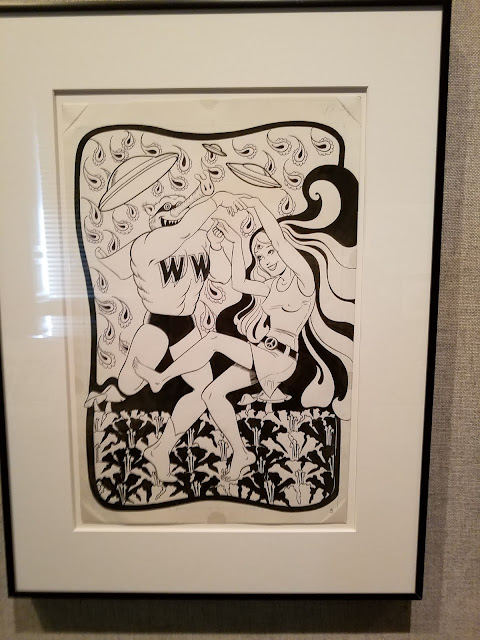 The comic book section is limited by both space and the difficulties in displaying bound printed matter, (as the Post Office classified comics when they were sent through the mail to subscribers). Again reflecting the interests of this sections curators, there are some rare pieces such as the recently-acquired All-Negro Comics no. 1 and DC’s World Best Comics no. 1, along standards such as a Disney issue of Dell’s Four Color Comics, EC’s Weird Fantasy, Lobo (an uninspired Western distinguished only by having an African-American hero), Harvey Pekar’s American Splendor, Mad no. 6, Twisted Sisters no. 1 and an fanzine among others. The Webcomics section just shows strips on a computer screen, made up from some of the electronic comics that the Library has begun collecting digitally including Ryan North’s Dinosaur Comics, Randall Munroe’s XKCD and Kate Beaton’s Hark! A Vagrant. It is nice that the curators are including this new form, but seeing them on a large computer screen in an exhibit gallery does not add anything to the understanding of the strips. 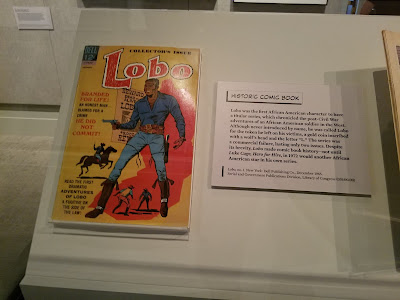 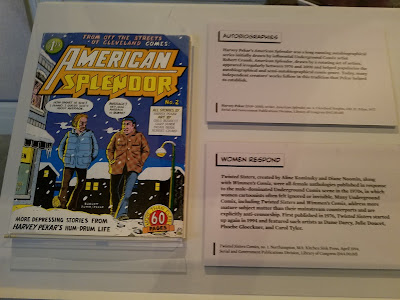 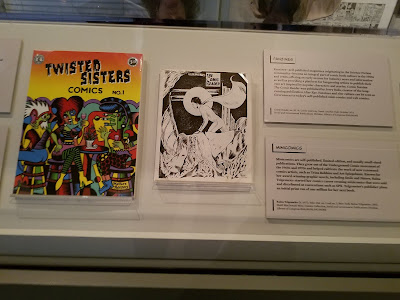 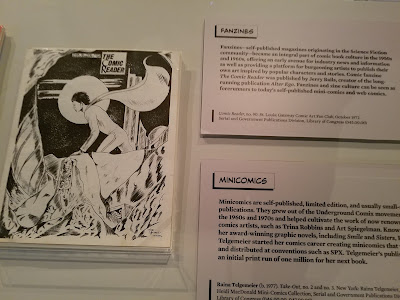 The exhibit will be switched out around February to preserve the paper items. In a small room next to the exhibit, Sara Duke’s selection of Herblock cartoons from fifty years ago is worth looking at, especially since the topics he drew and she selected are still problems and in the news.