However, I come to the realization that the majority of the comedy I absorbed during my formative years came out of National Lampoon or National Lampoon-related properties. The movies – Animal House and Caddyshack – really set the tone for my sense of humor. And everything else came from Saturday Night Live; many of the Not Ready for Primetime Players had done work with National Lampoon spinoffs and most the writers came directly from National Lampoon’s talent pool.

Intrigued by this, I searched around for copies of some of the standalone works that National Lampoon had published over the years. One of the items that caught my eye was a hardcover book published in 1977 called French Comics (the Kind that Men Like). I found a used paperback copy in no time flat and was amazed by what showed up. 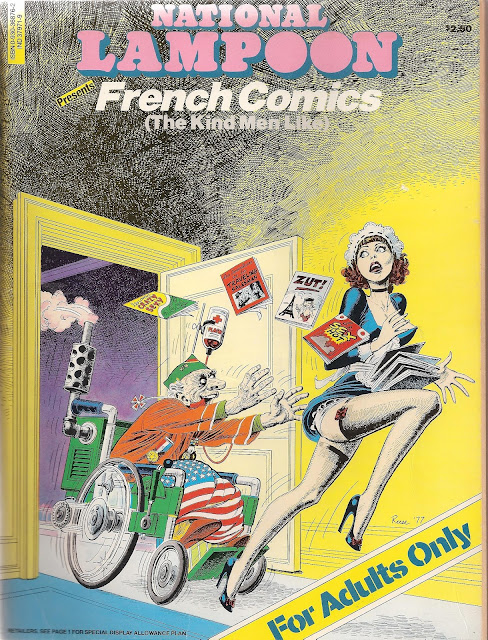 The lurid “implied rape is funny” cover looks like something straight out of Sex to Sexty, but the contents do not even remotely live up to the marketing. In fact, they skew in a completely different direction. 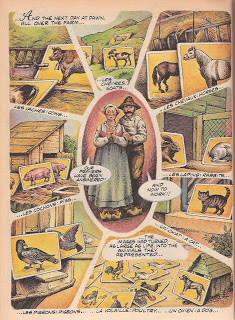 Looking through the copyright credits in the back of the book, it looks very much like members of the National Lampoon editorial team walked up to a newsstand in Paris and bought the current issue of every alternative comics anthology they could find: Pilote, Fluid Glacial, L’Echo des Savanes, and several others. The only magazine they didn’t seem to pull from was Metal Hurlant. (Of which, more later.) At the time, the anthology was still the dominant publishing format in Francophone comics (and it really hasn’t ever gone away).

The copy that I have is light on production values. The yellowing paper is one-step-above-newsprint and there is neither a table of contents or page numbers. The stories are just shoved together in no discernable order and the contrast in art styles is more than occasionally jarring. 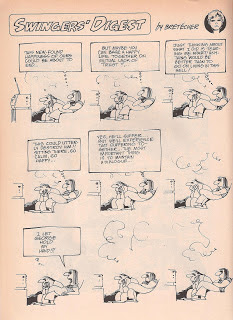 The names on the editorial team are probably the most interesting thing about the book. The three translators are Sophie Balcoff, Valerie Marchant, and Sean Kelly. Sean Kelly is American and his wife, Valerie Marchant, is French; they were also the first editors of Heavy Metal. One of the other credits in the book is Jean-Pierre Dionnet, who was one of the editors of Metal Hurlant. This is probably not a coincidence.

Given the timing (the first issue of Heavy Metal had a cover date of April 1977), National Lampoon’s French comics anthology feels very much like an unacknowledged proof-of-concept version of what became Heavy Metal. After all, National Lampoon was the company that published Heavy Metal until they were split apart in 1992. Using National Lampoon staffers on a pilot project doesn’t seem like much of a stretch – National Lampoon did a lot of media spinoffs of every stripe, so this edition falls into the category of “other stuff they did.” 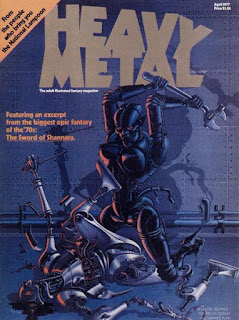 But if you read the editorial from the first issue of Heavy Metal, it’s not mentioned at all. The first editorial read as follows:

At 4AM on the nineteenth of December, 1974, under the mad marksman’s eye of the archer in the sky, on the feast of Bishop Nicasius, who prophesied the arrival of the barbarians who beheaded him, observed by whoknows how many orbiting whatnots, a linkless foursome previously identified as Druillet, Dionnet, Moebius, and Farkas were transformed into the Associated Humanoids. Shortly thereafter, a magazine entitled Metal Hurlant materialized on newsstands. Metal Hurlant means “screaming metal” – whatever that means. It was, and still is, issued by the Associated Humanoids. The magazine appears to be the work of an alien intelligence, and it indeed it is.

French is a difficult language to understand because of the large number of English words in it. Thus, when the French say “science fiction,” they are not, as you might think, referring to HG Wells or “Star Trek” or even Jules Verne. “Science fiction” is a term which can sufficiently define Big Macs, South America, Methodism, or a weird neighbor. Vogue Magazine, anything Belgian, and pop-top cans are certainly science fiction. The Humanoid “Moebius,” writing in Metal Hurlant, describes how, while listening to a Johnny Cash album, he realized that science fiction is a cathedral. Are beginning, dear reader, to sufficiently misunderstand?

And lo, it came to pass that Metal Hurlant found its way even unto the New York offices of the National Lampoon, where the editors sit around hoping to see something they can’t see through. After a series of transatlantic phone calls resulting in the permanent hospitalization of the FBI operative assigned to tapping our line, it was agreed that America should be exposed to the contents of Metal Hurlant for its own good. A series of high-level conferences concluded that Heavy Metal was the least comprehensible title for the magazine, and it was thus adopted. Certain American artists famous for their obscurity were relieved of their manuscripts, and now, as you can see, Heavy Metal #1 has been published.

And the rest is science fiction.

One wonders if the sub-par production values on the National Lampoon book prompted its erasure from the official narrative or if the official narrative just didn’t have room for the complication of this weird side project. Either way, as a mostly unknown precursor artifact to what would eventually become Heavy Metal, it’s fascinating. It also happens to be a cross-section of what some off-beat American humor writers in New York City thought that American audiences would find interesting in contemporary French alternative anthologies. Imagine if some French curators walked through SPX and bought any number of random stories for translation and reprint – the effect would be similarly eclectic.

I would not recommend the book to anyone but completists of Heavy Metal, National Lampoon, and/or people who like French comics translated into English. If you really want to flip though it, let me know and I’ll let you take a look at it. But – trust me on this – it’s more interesting in the context of a collection of Heavy Metal.

When I moved to Arlington two years ago, I didn't realize that Mike lived within a mile of my building. Nor did I realize that he lived next door to my girlfriend's friend from college. We also discovered, by accident that we work two buildings away from each other, because we work in adjacent organizations. The world is a very small place, sometimes.

In summary: this is an article about comics from someone in the DC area.

Posted by oletheros at 2:11 PM 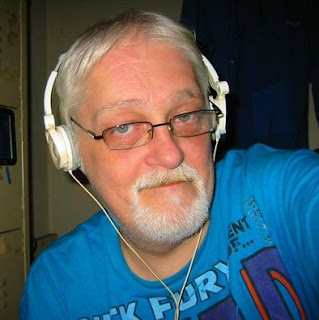