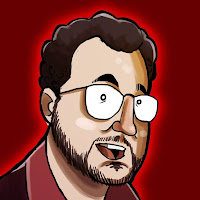 Geppi's Entertainment Museum (GEM) in Baltimore closed for good earlier today. It was one of my favorite museums with an overwhelming amount of fantastic material on comics and cartoons and I'm sorry to see it go. The only positive thing is that Steve Geppi is donating a lot of the Museum (3,300 items I'm told) to the Library of Congress in the coming weeks.

I've reached out to a few people to get their thoughts on the Museum. Dr. Arnold Blumberg was the first curator of the museum, and was very generous with his time over the years. As he has been this weekend, when he answered a few questions about the museum and his role in it.

I was proud to be Curator and part of the team that developed a one-of-a-kind display of 230 years of pop culture history, shedding light on the many ways we defined ourselves through the decades as a nation and as people. I think it's wonderful that so many media artifacts will now be available for public view. The collection will surely provide opportunities for future historians to examine the ways entertainment shaped and reflected the American experience

When were you curator?

I was Curator beginning in the summer of 2005, hand-picked by John Snyder, and worked on building the museum with the rest of the team for that next year until our opening on Sept. 2006. John was President of Geppi's Entertainment Museum when we started, and had already been running Diamond International Galleries before that and also Gemstone Publishing, which is where I was working as Editor when he tapped me to move over to the museum. I left in October 2010.

What did the work entail?

I was charged with being the intellectual custodian of the history behind all those amazing artifacts, coordinating educational and other programming in conjunction with other staff members, conducting tours and doing community and media outreach - lots of morning TV interviews! - writing most of the material on the walls and in various publications associated with the museum, and helping to care for and manage the collection alongside Registrar Andrew Hershberger. There were lots of other things in an average day, but that's the basic overview.

What was your favorite item or exhibit?

My favorite room was the museum within a museum - the comic book room, showcasing the history of that medium from periodicals and artwork stretching back centuries to the formal comics timeline of the 1930s to the present. One of my personal favorites was the Oscar Goldman action figure from the Six Million Dollar Man Kenner toy line in the 1970s room, mainly because it was one of the few things from that line that I never got myself.

Did you expect an outcome like this? It's a pretty munificent gift.

It's been years since I've been involved in the museum or in contact with anyone associated with it, so I have no particular insight into the reasons behind the museum's closure and the donation of the collection, but it's nice to know that all those items that give people so much joy and allow them to travel back into their own pasts will now be made available to view for free and at a facility that will respect their historical importance and preserve them for future generations. 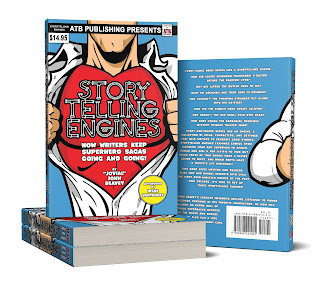 After leaving the Museum, you put together your own publishing house?

Yup, since 2012 we've put out a number of titles from ATB Publishing, and we just put out our first book on comics and superheroes, Storytelling Engines, this past May!

We'll be checking in with Arnold in the coming weeks to find out more about how he went from being a museum curator, to a college professor, to a book author and publisher...
Posted by Mike Rhode at 7:12 PM