Catching up with Chris Sparks on Team Cul de Sac, OR The story of the $11,000 Bill Watterson sketch

Team Cul de Sac was formed by my friend Chris Sparks to raise money for the Michael J. Fox Foundation's Team Fox charity for Parkinson's Disease research. Chris did this in response to our friend Richard Thompson's fight with and death due to the disease. Ten years ago this month Chris walked into a panel at Heroes Con in Charlotte, NC, and said "Who are you?" to Richard who was speaking about his comic strip Cul de Sac. It was something like love at first sight, at least on Chris' part, and when Richard was diagnosed, Chris turned his formidable attention to raising money for a cure (and you can donated at any time by clicking one of the links).


I talked with Chris after this year's Heroes Con put his fundraising at a new height when a sketch in a book by Bill Watterson sold for $11,000.

MR: How did Team Cul de Sac get started?

CS: I was fortunate enough to meet Richard Thompson (and Mike Rhode) at the 2008 Heroes Con, and then in 2009, Richard was diagnosed with Parkinson's. In 2010, I came up with the plan of making Team Cul de Sac through the Michael J. Fox Foundation's fund-raising arm, Team Fox. In 2011, we had the first Drink & Draw at Heroes Con for Team Cul de Sac (TCDS) and this was the eight anniversary of the Drink & Draw.

MR: The D&D started with cartoonists sitting around doing sketches and drinking beer, but it's gotten bigger than that, right? 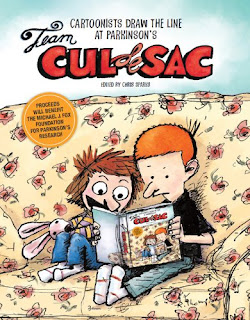 CS: Mainly it's using blank coasters where they can sketch or 5x7" pieces of paper that they can draw on. We have it set up that it's between $5 and $50 for these little drawings. From there, we ask donations of larger pieces so we can auction them off for $200, 300, 500 at the larger Heroes Con art auction the following night. We've also had some live-painting events at a the D&D too.

MR: So when Richard was alive, he finally agreed to let people draw his characters to culminate in an auction and a book...

CS: The book is called Team Cul de Sac and that was released in June of 2012 after two years of wrangling cartoonists... like cats.

MR: And one of those was Bill Watterson who came out of retirement...

MR: This past weekend's auction had another piece of art by Bill Watterson for TCDS, which I guess the third time he's done something for the charity?


CS: Well, it's more than that. Artwise, he did the painting, then three ghosted strips for Pearls Before Swine, then signed books for us to sell. He signed The Art of Richard Thompson, the catalog from his Ohio State University's Billy Ireland exhibit, and five softcover sets of the Complete Calvin & Hobbes as well as some posters. This last donation was a sketch of Calvin and Hobbes in a wagon inscribed for Team Cul de Sac and that is one of maybe only two sketches that he's done for the public since retiring the strip. As he's said, "it's very rare." The drawing was 2 inches x 2 inches in a copy of The Complete Calvin & Hobbes.

We were trying to get more bidders involved so we did proxy bids to me until 8 pm on Saturday night (June 16th), and we also did an online aspect via Facebook. It was something that Heroes Con had never tried to do before so we were working the bugs out of that. We had the live auction on Saturday night at 9 pm. Heroes Con organizer Shelton Drum to help fund the show but made an exception for the auction of the Calvin piece. It went quite well. We had proxy bids up over $5000 before we started, and then as the bidding started we had two dueling bidders and it ended up selling for $11,000.

MR: And it sold to Tony Harris, the comic book artist?

CS: Yes, he and his son have a strong personal connection over reading C&H when his son was younger. When Tony saw the piece, he said, "That's going to be mine. We're going to go home with that." And he did. I'm very excited for Tony because he's a real fan of the strip and to me that makes it more special when a fan won it.

MR: You've mentioned in the past that you and Richard had sent a goal for TCDS fundraising of a quarter of a million dollars...

CS: The real truth of that is that I was swapping emails with Michael Cavna of The Washington Post when I first started the project and Richard and I had talked about how much money we could raise. I was very happy with $25,000 as a goal, but when I was writing back to Mr. Cavna, I put $250,000 and that's what he published. Richard and I had a good laugh about that. By mistake, I added one zero in an email I didn't check, and went from $25,000 to $250,000.

MR: So what's next for TCDS? Are you going to keep doing this every year, or do you think it's run its course?

CS: I don't think it's run its course for two reasons. Over the past ten years now, I've met so many people with Parkinson's and this is one event they really enjoy coming to. And the Heroes family has been such a part of this, and we have such a big draw now. It went from being in a little pizza place across from the convention center with five or six tables to now filling up the Westin Hotel ballroom with hundreds of people. It's a great camaraderie and it's great for fans at the show because it's a lot of art that they can afford, that's not $1,000 or $10,000 per piece. They have a good time and feel good about donating to a good cause. And one of the best parts about Team Fox is that every penny we raise goes to research. Very few charities can do that, and it's very important to me to know that the money's going to research.