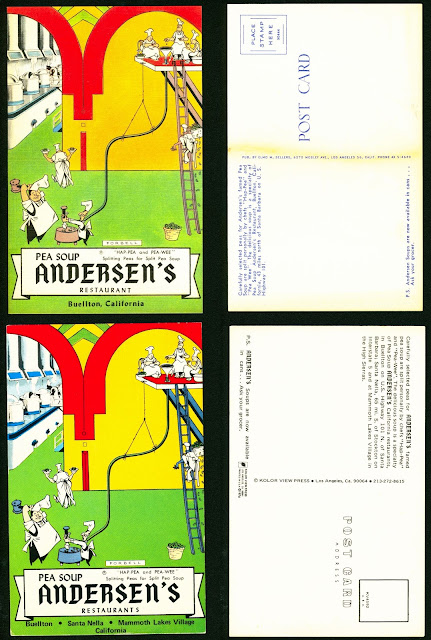 Here's a couple of post cards I bought a few weeks ago in Arlington's Civitan flea market, with a nice gag cartoon about making pea soup. The pea soup empire grew well - it still exists!

And here's Pea Soup Andesen's website since I'm posting their cartoon.Their website says about the cartoon: "In the early thirties a cartoon appeared in the old "Judge" magazine. It was one of a series by the famous cartoonist Forbell, under the heading of "Little Known Occupations." The cartoon showed the little known occupation of splitting peas for pea soup, with two comic chefs standing at a chopping table, one holding a huge chisel, splitting peas singly as they came down a chute."

More information on Charles Forbell can be found in Biographical Sketches of Cartoonists & Illustrators in the Swann Collection of the Library of Congress.