by Mike Rhode
Baltimore Comic-Con is one of the best and friendliest of the mid-size superhero focused cons. Under the leadership of Marc Nathan and Brad Tree, it's grown quite a bit in a decade and a half, but still remains enjoyable for all ages and interests. Hang Dai Studios is based in Brooklyn, but as usual will have a big presence at Baltimore. My friend Dean Haspiel (and Hang Dai Studios founder) will be there with the whole studio, a week after he, Christa Cassano and Gregory Benton attended the Small Press Expo. We hope to have interviews with everyone in the studio throughout the week. Our third interview is with Christa Cassano. Come back tomorrow for interviews with Dean and Gregory.


I do original type of comics, not sticking to any sort of limitation.


Originally, I used pencil, but had to switch to working on a Cintiq after dislocating the middle finger of my drawing hand a few years ago. This is because you can press a lot lighter, so it is much less painful. At the one year mark of the injury, I was only able to draw for a few hours on paper before pain set in. I'm hoping enough scar tissue has gone away so I can go back to it soon. Really want to produce tangible art again!

I was born in the latter half of the 20th Century (that's the best you're getting) in the state of Washington.

I've only been doing comics for the last three years, before that I was in fine art and received extensive training in drawing, painting and sculpture.

Discovering Daniel Clowes' Eightball in the early 90's is what made me want to make comics. I carried that torch for decades before finally realizing it, so I guess I'd say he is my ultimate influence. Sam Keith is another early influence, as is Paul Pope, who I've spent a lot of time studying. It's a hard question to answer though, because I am continually uncovering new gems of comics work to worship and adore, but I rarely look outside myself to come up with panel solutions and my drawing style arrived naturally from having taken thousands of life drawing classes, so I can't help but draw like I do.

I would have started doing comics much sooner, or rather, never stopped when I started in 5th grade.

The up-coming graphic novel Ghetto Klown, written by John Leguizamo and based on his one-man show of the same name. 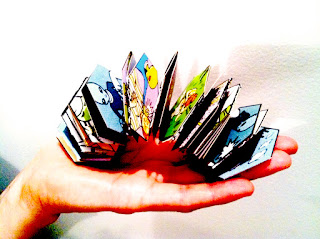 
Probably the one I currently have for sale called A Letter Lasts Longer. It's written by Dean Haspiel and was presented to me and 7 other cartoonists as an exercise/experiment at the Atlantic Center for the Arts graphic novel residency in Florida a few years back. We were to create a one page comic around what he had written. Instead, I took extreme liberties and drew a nearly fifty panel comic that you could enter from several points, recently turning it into a uniquely formed accordion book. That residency was the entry point for me into the world of comics and the experiment and its production taught me that I can take my crazy ideas in comics and make them real.


Well, as much as I enjoy doing uncommon things and pushing boundaries, I am going to move forward with something that came to me rather naturally, without the usual hair pulling. I recently wrote the first draft to a five-issue series that is a pretty straight forward revenge story. It's set in a dystopic alternate reality called Pawnland.

What do you do when you're in a rut or have writer's block?
Eat, usually. Or ride my bike.
What do you think will be the future of your field?
tumblr, robots, extinction.
Why are you at the Baltimore Comic-Con this year?
Because Dean Haspiel is a favored and time-honored guest who graciously shares his table with fellow studio mates. This year our studio will be doing a panel and Hang Dai Editions will be debuting 3 new books, one of which contains a six page story I drew. 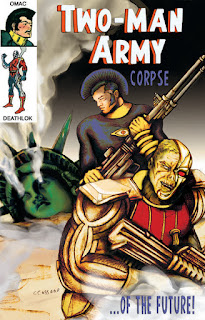 What other cons do you attend? The Small Press Expo, or others? Any comments about attending them?
I just came back from SPX, my second year in attendance and always a good, fun time. Not sure about future cons, need to lay low and draw.
What's your favorite thing about Baltimore?
Baltimore Comic Con Director's Brad Tree and Marc Nathan!
Least favorite?
That I haven't seen The Wire yet.
What monument or museum do like to take visitors to?
I dig going to the harbor outside of the convention.
How about a favorite local restaurant?
Whatever that one is on the Harbor that begins with an M.
Do you have a website or blog?
I have a flickr with images of my work and an old blog lingering around.
https://www.flickr.com/photos/ccassano/
http://swinginmeatcomics.blog.com/
Posted by Mike Rhode at 1:23 PM