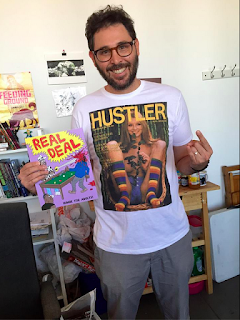 Baltimore Comic-Con is one of the best and friendliest of the mid-size superhero focused cons. Under the leadership of Marc Nathan and Brad Tree, it's grown quite a bit in a decade and a half, but still remains enjoyable for all ages and interests. Hang Dai Studios is based in Brooklyn, but as usual will have a big presence at Baltimore. My friend Dean Haspiel (and Hang Dai Studios founder) will be there with the whole studio, a week after he, Christa Cassano and Gregory Benton attended the Small Press Expo. We hope to have interviews with everyone in the studio throughout the week. Our first interview is with writer Jonathan 'Swifty' Lang (because he sent his answers in first. We're egalitarian that way).

Where does 'Swifty' come from?


For my comics exploits, I use Swifty. There were a lot of serious-minded Jonathan's in Brooklyn who were writers at the time (Ames, Lethem, Saffron Foer) and I needed something unique. A college nickname did the trick.

I am a writer and am working with genre. Predominantly horror, but am also exploring crime. I am interested in using genre as a lens to explore contemporary social issues. I am also working on a weekly three-panel Tijuana Bible because the current comics environment is suffocating expression in the name of egalitarianism. My current book is Plunder (Archaia 2015). I am the writer on this project and all the art is by Skuds McKinley (and the panels shown here are his work).

As a writer, why have you joined a studio? Historically in the comics field, studios have been organized around artists who had a pile of equipment and who also could pitch in and work on each others assignments.

While the mechanics of writing and drawing are certainly different, those of storytelling are not. I am surrounded by a trusted group who will always serve as readers, offer input, and be critical of my work. I am also encouraged by the sheer productivity of what is happening around me. How could I not be inspired when I look to over and see what studio mates are working on? Also, I have a trusted group I can seek advice from when it comes to working with publishers and other artists. Their experience in the industry is greater than any class I could have taken. When it comes to sharing inspiration, whether that be a movie I could recommend or a great podcast I may have missed, we are all there to share ideas. Collaboration goes beyond equipment. It is about respect, support, and I'm not afraid to say it, love. 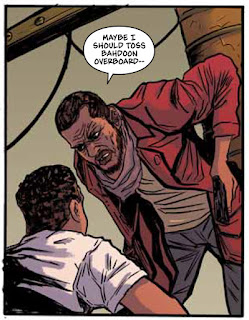 I was born in Liege, Belgium in 1976, but moved when I was two and a half. I grew up in South Florida (Miami then Hollywood, FL) I went to school in Boston (Brandeis) and then Film School in Amsterdam. I have lived in Brooklyn now for 14 years. I have done some bouncing,

My background is in English Literature and Film.

I notice you cite mostly movie directors as influences. Why are you working in comics as opposed to film?

I work in comics because the way I work, there is overlap. It is visual story telling built on collaboration. I enjoy telling stories and exploring the medium has made me a better writer in terms of film as well. I consider myself a student of the medium rather than an expert. I think that not growing up with a strong comics background (my love was Mad magazine) has allowed me to tell stories that are not necessarily referential or homages to existing properties. It is vital to know the history of medium as it allows for another layer of storytelling. I think it is the equivalent to someone who is a fine artist making films. I think a broad range of influences makes for diverse storytelling. I do have writers I really admire right now (Ed Brubaker, Scott Snyder etc.) but I can't cite them as influences as much as people who I think are doing fantastic work. Colleagues would be weird as well since I don't know them personally. I think in some ways I have tried some stuff I wouldn't have had the courage to otherwise if I had been more schooled in the history. I rarely feel a "you can't do that" in the same way I do for film when there are restrictions like time and budget. I am still trying to figure it out each day.

All of them. I am all about process.
What would you like to do or work on in the future?

I take a shower. I do a tarot reading then I get back to the keyboard.

Why are you at the Baltimore Comic-Con this year?

To celebrate the hard work of those I care for. To meet new people to inspire me and collaborate with. 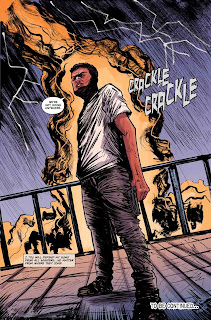 What monument or museum do like to take visitors to?
The Film Forum. It's not really a monument, but it's monumental to me.