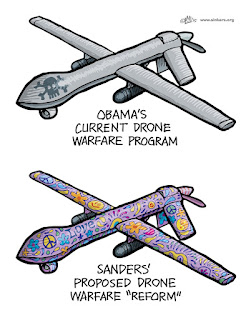 I was just checking out this short article in The Hill today about Pwogwessive hero Bernie Sanders and his declaration that he wouldn't end the US drone warfare program. Can somebody please tell me again why I should so much as lift a finger to support this brazen hypocrite? Check this out:

"I think we have to use drones very, very selectively and effectively. That has not always been the case," Sanders said.

No shit, Sherlock. Christ, is this clown really the Great Progressive Hope? Are you friggin' kidding me, man?

"What you can argue is that there are times and places where drone attacks have been effective," he added.

Oh, yeah, especially against weddings, funerals and schools. Now we know why Bernie doesn't spend much time discussing foreign policy, and prefers to keep beating the shit out of that old economic inequality riff. If Pwogwessive America found out too much too soon, they'd bolt the Donkeycratic Party and run like the place was on fire.

Basically, what we're got here is a warmed-over Obama, with the economic inequality rhetoric dialed up a notch or two for all the gullible bougie pwogwessives. Dude had to be dragged kicking and screaming into addressing the ongoing police reign of terror against Black America, and he'd probably still be ignoring the issue if #BlackLivesMatter hadn't publicly gotten all up in his shit about it.

This doorknob needs to stop referring to his sheepdog campaign as a goddamn' "revolution". It's really offensive.