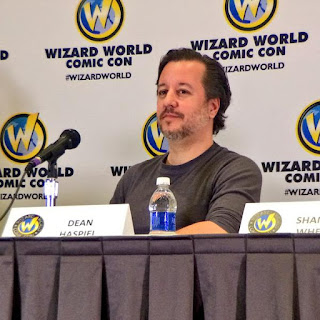 Baltimore Comic-Con is one of the best and friendliest of the mid-size superhero focused cons. Under the leadership of Marc Nathan and Brad Tree, it's grown quite a bit in a decade and a half, but still remains enjoyable for all ages and interests. Hang Dai Studios is based in Brooklyn, but as usual will have a big presence at Baltimore. My friend Dean Haspiel (and Hang Dai Studios founder) will be there with the whole studio, a week after he, Christa Cassano and Gregory Benton attended the Small Press Expo. We hope to have interviews with everyone in the studio throughout the week. Our fifth interview is with Dean Haspiel.

Where did "Hang Dai" come from?

"Hang Dai" was derived from HBO's "Deadwood." Whenever Al Swearengen and Mr. Wu would curse their way through a private deal and come to an agreement, Wu would cross his fingers and say "Hang Dai." Or, something that sounded like that and which meant "Brotherhood." Or, as my studio mate Christa Cassano likes to say, "Sisterhood."

I hopscotch between superhero and memoir and psychedelic romance comix. My recent effort is called Beef With Tomato, co-published by Alternative Comics and Hang Dai Editions. It's about my escape from Manhattan to Brooklyn. 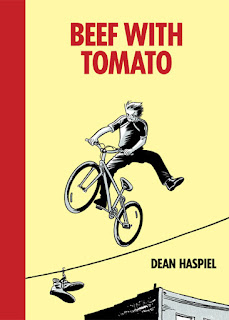 The comic book rack on the newsstand at the corner of 79th street and Broadway in NYC was my comix kindergarten. Later on I discovered a steady flow of pop art pulp treasures at West Side Comics, opened a weekly account at Funny Business, and discovered American Splendor and Yummy Fur at Soho Zat. After that, any inklings of pursuing a normal life went out the window when dreams of drawing comix for a living took over and held my sway. I never learned how to draw comix in school because school didn't teach comix. School shunned comix. Comix taught me how to make comix. And, I'm still learning how, one panel at a time.

The Thing: Night Falls On Yancy Street. I wasn't ready. I would ask to change the dark ending, too, so me and Evan Dorkin could make it Marvel canon rather than Marvel folklore. 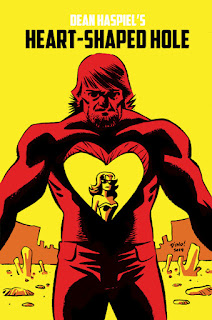 I believe I'm best known for my collaboration with Harvey Pekar on The Quitter. Possibly, the ten-issues of The Fox I recently co-wrote and drew for Archie Comics. Maybe, some Billy Dogma.

Billy Dogma in Fear, My Dear. And, Heart-Shaped Hole.

I aim to focus on creator-owned comix but, given the opportunity, I'd like to write and draw The Fantastic Four, Captain Marvel (Shazam), O.M.A.C., Deathlok, and bring back Marvel Two-In-One, featuring The Thing. I also have a great Batman & Superman story that features cameos of the JLA, done in the spirit of a cross between Sullivan's Travels and On The Road.

Wash dishes. Work on something wholly different. Mix it up. Your mind is always working. Let it work by letting it relax and think different.


Patronized digital comix produced one panel at a time; published one per day, delivered directly to your phone, and story arcs get collected into print (if necessary).\


Why are you at the Baltimore Comic-Con this year?

Baltimore Comic-Con is my favorite show, bar none. A perfect combo of rookie and veteran cartoonists among old and new comic books and just the right amount of cosplay. I've also been a regular guest for almost 15 years.


What other cons do you attend? The Small Press Expo, or others? Any comments about attending them?

Besides BCC, I usually attend SPX, NYCC, MoCCA, CAB, and Locust Moon Comics Festival. I was a guest of Wizard World six times this year. They treat me very well.

I've yet to encounter anything in Baltimore to make me dislike its innate charm.


One day I plan to stay an extra day or two so I can personally visit Baltimore's culture.


Out of pure proximity and laziness, I tend to grab dinner at the M&S Grill on E Pratt Street and soak in the Inner Harbor sights.

http://deanhaspiel.com/
Posted by Mike Rhode at 9:59 AM