“Great Power, Great Responsibility” covers 1959-1977, two time periods termed by fans as the Silver and Bronze ages. The Silver Age is considered starting when DC reintroduces its Golden Age heroes such as the Flash and Green Lantern in new, science-fiction themed identities. The Bronze Age begins roughly by Jack Kirby's leaving Marvel for DC, and Stan Lee stopping writing in favor of promotion. The merging of the two periods is somewhat uneven. 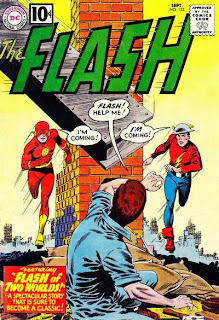 Jarringly, Marvel's early 1960s books are discussed before the DC comics that made them possible. Received wisdom is that the Fantastic Four was conceived as a response to DC's success with the Justice League of America. Whether that's true or not, DC certainly reinvented the superhero before Marvel did. Instead the film opens with Marvel, switches back in time to DC and then jumps forward to 1966's camp Batman tv show. Marvel universe co-creators Jack Kirby and Steve Ditko are also given short-shrift.

From there, while noting DC's comic books withering on the vine when the show is cancelled, director Michael Kantor moves on to socially relevant comics such as Marvel's introduction of the African prince the Black Panther. Unfortunately, more credit may be given to introducing characters including  Luke Cage, Hero for Hire and the Panther than is deserved. But Bill Foster's commentary, as a black man reading comics, is at this point and is fun to watch, and I'll defer to his viewpoint. 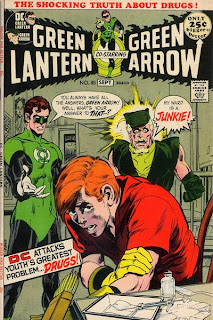 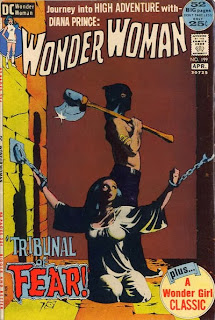 Comics slowly-growing social relevance is tracked via the use of an issue of Spider-Man to warn against drugs, even though the Comic Code Authority wouldn't approve it. DC followed that up with an issue of Green Lantern / Green Arrow by Denny O'Neil and Neal Adams that had Arrow's superhero sidekick Speedy as a heroin addict. The section on GL/GA is among the best in this segment, and includes some old film footage of the creators talking about the series at the time. Another good section is Jim Steranko's take on how he reinvigorated Nick Fury, Agent of S.H.I.E.L.D. DC's attempt to depower and do something similar with Wonder Woman is held up as a triumph of feminism, but the comic books sold miserably at the time. Her successful television show (1976-1979), and commentary by Linda Carter round this section out. 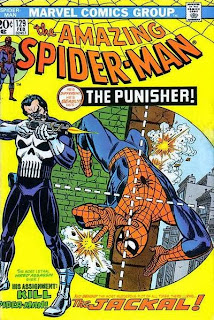 Kantor then moves achronologically again, and switches to a "backlash" against sunny and optimistic superheroes while the real streets of New York are mean and gritty. The death of Spider-Man's girlfriend Gwen Stacy (1973) and the introduction of the Punisher (1974) are held up as examples. The Punisher gets more cultural significance than he deserves - as the film points out, characters such as Dirty Harry had already been successful in movies. Comic books were just following a trend, as usual. The character didn't really take off until the late 1970s when Frank Miller reworked him in Daredevil, and then he truly boomed during the 1980s grim-and-gritty years. Issues from the same year have Spider-Man driving a Spidey-mobile and fighting a hopping villain called the Kangeroo.

The change from newsstand sales to direct market sales in comic book stores occurred in this time period, and is arguably the most important factor in sustaining superheroes, but I don't believe it was mentioned. Overall this episode probably tries to cover too much time in a period when comic books changed a lot. I still enjoyed the show, especially the creator interviews.

All 3 parts of the documentary air locally on WETA at 8 pm on October 15th.